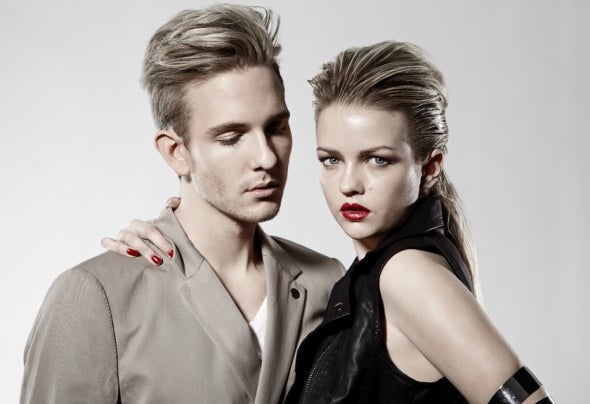 Meet Smith & Thell, a young, fresh and hit oriented Swedish electro/pop duo now getting ready for their single-debut on the newly launched Uniform Beat label. Together they ́ve started a musical journey combining a hard hitting, electronic and clubby foundation laced with Mary Jane ́s tender, fragile and rather unique voice and expression in a perfect balance. Already getting lots of blog love from around the world and with a fan base building all the time we predict a bright future for Mary Jane Smith and Victor Alexander Thell...Meet Mary Jane Smith and Victor Alexander Thell. Also known as Smith & Thell. For short. Two young creative souls that already over 10 years ago decided to turn dreams into reality and make music the main focus of their respective lives. Through a music event in their hometown they met and fell completely head over heels in love with each other’s musical taste, ambition, vision and passion for the art. After joining forces the outcome of their musical marriage ́s taken many turns and looked and sounded very different and members of the collective have come and gone. At a certain point Mary and Victor decided to replace them all with machines and somewhere in this electro acoustic landscape inspired by strong influences such as Bjork, Chemical Brothers and Bat For Lashes they ́ve managed to give birth to something we like to call unique and very promising. Fresh, young and stylish electro/pop that is already getting lots of blog love around the world...Their debut single “KILL IT WITH LOVE” including remixes from Andalo (former member of Guru Josh Project with a worldwide global smash called “Infinity” back in 2008) was released 7th of May and spent a whole week No 1 on the Swedish i-Tunes chart for electronica.Welcome to the world of Smith & Thell. Stay as long as you like... Blog hype: Fizzypop about KILL IT WITH LOVE:It's rare that a debut act like Smith & Thell start off with a corking track and then manage to improve on it with each subsequent release but my favourite Scandi- English duo have done just that. It's not that I don't love their older tracks (I really do), but Kill It With Love seems like a culmination of all they have learnt before & smashes it out the ballpark (whatever that means). It's a dance corker that is based around a stabbing piano-house riff, the sweetly delivered "Kill It With Love" refrain & a propulsive vibe that is hard to resist. The song wisely knows when to hold back & teaase the listener and when to explode in a cascade of glittering beats that entice you to lose your inhibitions, grab the one you love and shimmy. Utterly amazing.“Swedish duo Smith & Thell have returned with their most poptastic output to date. Kill it with love is one of the best songs I ́ve heard this year.” / Scandipop “Driven by a sleek, pulsing club groove, a deliciously looping piano riff and Mary Jane's candy-coated vocals, the hyper melodic "Kill It With Love" is the ultimate blend of pop perfection that will have you tapping and humming along the moment it hits. It's an irresistible tune that is masterfully produced with its streamlined arrangement and crisp production stylings. Smith & Thell prove once again that Sweden has its finger tightly on the pulse of what's pop and happening. Mary Jane and Victor have been working together on music for a couple of years. They first met up at a concert in their small hometown and instantly bonded over everything pop and decided to work together. Initially, the group started out as a full-band but Mary Jane and Victor opted to go forward as Smith & Thell with a strictly digital, no fuss sound to focus solely on serving up great hooks and a tightly produced sound. Mission accomplished. This "Kill It With Love" is all that and much more. / Arjan Writes“Oh Scandinavia, you do spoil us with your vast array of superior pop. The fact that so few of your homegrown talents manage to break in to the UK music scene is a constant bitter disappointment to me. It prevents me from being ever truly happy and, when I end up as a grizzly old hermit and children point at my house as they pass by, I’ll curse to the skies that it all could have been so different. If only your carefree and uplifting pop had the weight to replace some of the crap that we’re subjected to. Not all of it. Just some of it. Like Ed Sheeran. And insipid covers of rock and pop songs, performed by whimsical female soloists. If you agree, imagine for one second that this debut single from Swedish duo Smith & Thell had accompanied you to work in the morning. What a smile on your face you’d have as you walked in to the office. You’d probably be walking with an uncontrollable sashaying bounce in your step. Because ‘Kill It With Love’ is fab.”/ The Re- View“A girl/boy duo, Sweden and some 90s inspired electro sounds is usually a good formula for pop perfection and Smith and Thell are no exception to that rule.” / Made Up Chart"The new song is not like what they had done. I really liked their previous productions but this is just amazing. The song is definitely a perfect pop production with a magic touch between the piano and euro-dance music of the nineties.” / Josep Vinaixa “Love the new track! I played it on my show today. Sounds terrific on-air.” / Larry Flick“Cool new electronic pop from Sweden.” / Steve Anderson (creative producer for Kylie Minogue etc...) http://smithandthell.blogspot.com/ http://www.facebook.com/Smithandthell http://www.youtube.com/user/smithandthell http://twitter.com/smithandthell http://soundcloud.com/uniformbeat/tracks http://www.arjanwrites.com/arjanwrites/2012/02/new- smith-thell-kill-it-with-love.html http://www.scandipop.co.uk/?p=9093 http://www.scandipop.co.uk/?p=8324 http://www.sugarbang.com/music/2012/2/22/listen- hump-day-mix-22212.htmlhttp://there- view.tumblr.com/post/17777036290/smith-and-thell- kill-it-with-love http://josepvinaixa.blogspot.com/2012/02/smith-thell- kill-it-with-love-single.html http://madeupchart.com/smith-thell/