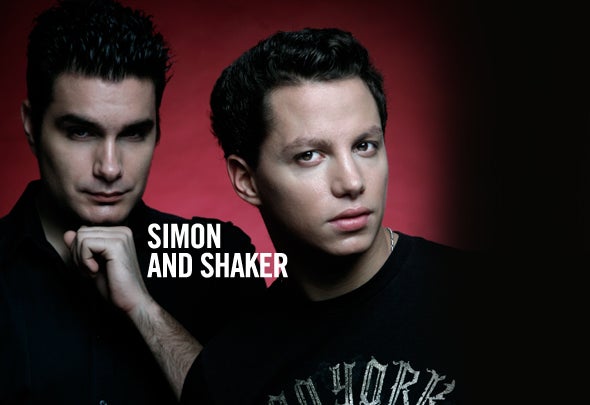 The Future is Here. Simon Garcia and Karim Shaker are Simon & Shaker, two of the best djs and producers Spain has developed in the last few years and the reason why the Spanish dance sound has moved a step forward in the last couple of years. From the birth of their first single, "Outstreet" (under the pseudonym "The Sundayprayers"), their rise within dance music has been unstoppable. Numerous productions have been included in some of the best compilations around the globe (Ministry of Sound, Global Underground, etc…) and have crossed all musical boundaries with djs from all dance music genres playing Simon & Shaker productions: Pete Tong, Roger Sanchez, Bob Sinclair, Paul Van Dyk, Victor Calderone, Danny Tenaglia, DJ Tiesto, Steve Lawler, Deep Dish and John Digweed. With more than fourty releases on various labels and hit after hit, confirms a very special quality in their music. Classic productions like "Central Park", "Fiebre", "Make It", "La Noche" (alongside Coca & Villa), "Freshness" or "Zero" have placed the Simon & Shaker sound on the world's best sound systems. Toward the end of 2004 "Dual" was released, their first mix compilation. The tracklisting highlighted the new house sound which Simon & Shaker developed at a very special moment in Madrid. A new concept which was see by many as an innovation which not only crossed into the specialist dance market but was well received by the general music buyer as well. "Dual: The Definitive Spanish Underground Compilation" was a huge success for this duo. The combination of great production and their abilities behind the decks have led to a very high demand across the globe: Japan, USA, Bulgaria, The Netherlands, Indonesia, Ukrania, Israel, Cananda, Mexico, Colombia, Dominican Rep, Sweden, Norway, Egypt, France, Portugal, Morroco, Slovenia and Russia are some of the main countries you can find them tearing up dance floors. In 2006 Simon & Shaker juggled their time between working on new productions in the Studio, performing and running their own labels State Recordings (geared toward the more demanding dance floors, the firsts references "Zero" & "Plan 9" were licensed to Electronic Elements in The Netherlands) and Superfly Recordings which deals with the more commercial side of house. They also released Pure State and Last Trip on Dekay Records which is owned by Mathew Dekay. 2007 started at a fasted pace and keeps on going with new productions to be released on Electronic Elements. There will also be an avalanche of remixes for various labels, with the highlight so far being there remix on Stealth which is owned by the one and only Roger Sanchez. Local FM is one of the very few official Spanish dance radio station which broadcast nationally. Simon and Shaker now broadcast their show "Central Park" every Tuesday at 10.00 pm. This show has given them the opportunity to showcase the wide variety of house which can be found in one of their dj sets. Simon & Shaker: Innovation and quality with one objective: Dance. www.simonandshaker.com www.myspace.com/simonandshaker