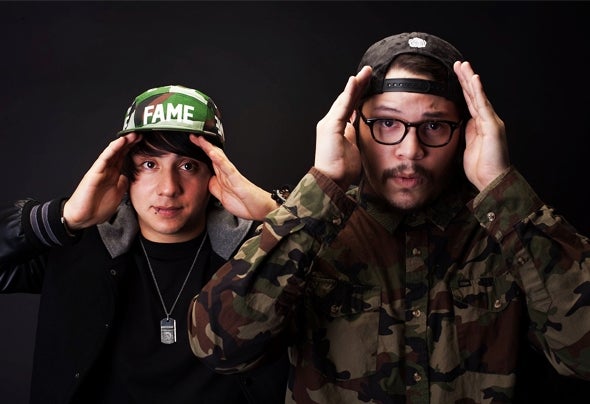 Shelco Garcia & Teenwolf are 24-year old DJ/producer prodigies, gaining notoriety in the big city of Las Vegas for doing their part to push the EDM movement beyond it’s limits. Far from being followers, they have proven themselves to be leaders and have plenty more to offer the genre than just a catchy name. These boys have been living and breathing the electronic dance music scene before mainstream music had a clue what it was. Both equally inspired by the ‘Moombahton’ movement (a cross between house and reggaeton) in 2010, they became the Vegas pioneers of the blended fusion genre. Not yet having joined forces. Their first collaboration came from a random studio session that was arranged just to ‘see what could happen’. That first track was ‘Fat Man Bass’ and after it was played by Laidback Luke in Amsterdam, the positive feedback they received was overwhelming. Their potential for success was greater than either one of them had initially realized and they continued to expand their production portfolio. They decided to send their second collaboration directly to Laidback Luke himself. Upon receiving it he offered them the opportunity to release a official Moombahton EP for his label ‘Mixmash Records’ – and thus, Shelco Garcia and Teenwolf became one. That Moombahton EP (later renamed the ‘Holy Shit’ EP) was just the beginning for the duo. Their first official remix of “More” (a Laidback Luke/Dimitri Vegas & Like Mike collaboration) charted in the top 100 of the electro house beatport charts. They continued to receive attention from the biggest names in the industry including the twerk-God himself, Diplo. Shelco Garcia began his music career as a drummer, originally from Pasadena, California. During infrequent breaks from touring with various bands, he decided to experiment with the electronic side of production and hasn’t looked back. Teenwolf (Bryan Orellana) is a Vegas native, who also got an early start in the world of music and production. The name ‘Teenwolf’ comes from his youthful talent and insatiable hunger for success. They have both settled in nicely to the electrified feel of Las Vegas, involving themselves in the downtown club scene movement as well as bigger shows on the strip. Their performances can best be described as high-energy sets with a big room Dutch sound that creates a lasting impression. This signature style is what helps set them a part to provide an EDM experience unlike any other. Now exclusive Mixmash artists, they have continued to expand their professional list of contacts and collaborators to include Major Lazer, Kid Sister and even Wil.i.am and Miley Cyrus. Their most recent EP ‘House Party’ charted #19 in the top 100 EP releases on beatport and the boys aren’t slowing down. Being managed by European Music Market, who also operates Studio DMI at Wynn/Encore, has added the experience of mixing/mastering legend Luca Pretolesi to their arsenal. With everything in line, the boys are ready to expand their territory outside of the Sin City lights. They want you to be able to leave a show saying ‘I partied with Shelco Garcia and Teenwolf and survived!’