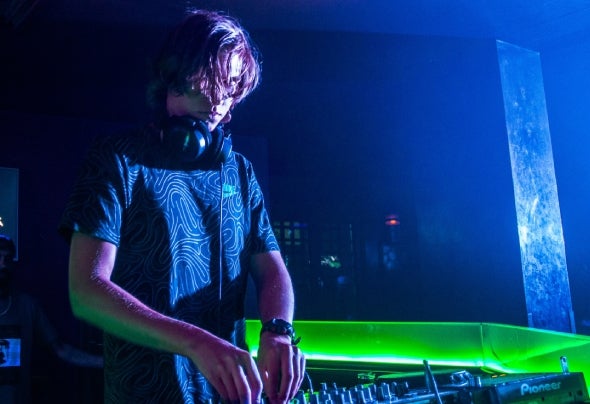 Nikita Krakhofer, better known by his artist name Scorpodra is an Austrian/Russian DJ & Producer. Born in Hurghada, Egypt in the year 2000, he grew up on the Red Sea and is now surng the waves of an international student’s life. Having nished UWC Atlantic College in Wales (UK), he will follow on his studies at St. Lawrence University in Upstate New York (USA). His unique style is reective of the multiple cultures that have infuenced him. Together with the management of Steigenberger, he established a weekly event called "Nikita Night", which is running successfully every Saturday since July 2018 at Elements Club & Lounge in Hurghada, Egypt. Scorpodra won his rst international award in June 2017 with the remix of the song "We Know" by Paul Sanchez. In July 2018, he headlined for "The Winner Takes It All" wakeboarding competition at Sliders Cable Park in El Gouna, Egypt. In March 2019, together with Sungdi, UWC Atlantic College and St. Donat's Art Center, he organized a music production project that resulted in an 8 track album called "Our Legacy". The album features musicians from all around the world (UK, US, Canada, Germany, Austria, Norway, Japan, Kenya, Bangladesh & Egypt). In April 2019, Scorpodra & Sungdi established the DJ & Producer duo "The Brokers" and presented their debut EP. In May 2019, Scorpodra published his single "The Key To Success" through the Italian record label Future Plan Sounds. In August 2019, he published his single "Ayour" through the the Macedonian record label Cafe De Anatolia. As a performer, Scorpodra opened for the world famous band "Toploader" as the lead singer & guitarist of "The Support", a cover rock band. During his DJ sets, he often includes live guitar, which makes him stand out from traditional DJ's.