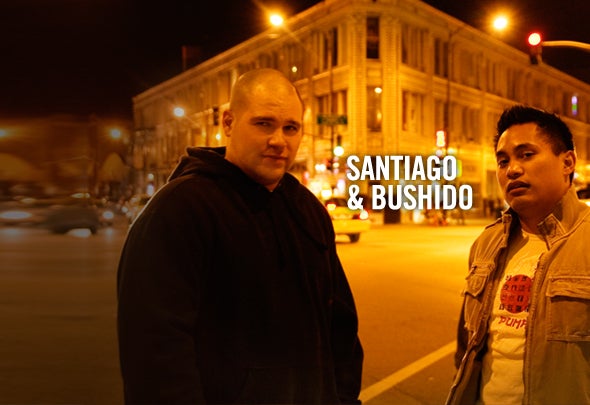 Santiago and Bushido:  Amidst the countless dj's and producers working in the burgeoning Chicago House scene, Santiago and Bushido stand apart from the rest with their unique blend of tech-tinged house beats. Since teaming up as a production duo in 2001, Chris Santiago and Tim Bush have helped push forward the sound of house music with their innovative style of production which encompasses many influences from the hard hitting to the deep and soulful. At the core of Santiago & Bushido's sound lays the forward thinking, genre crossing, funk-tech that has given them critical moxie in Chicago and beyond.  Having been intimately involved with music his entire life Bushido picked up his first pair of turntables and sampler on his 16th birthday and immediately went to work mixing, sampling, and cutting up any piece of vinyl he could get his hands on. His carefully crafted dj sets caught the notice of some of Chicago's nightlife elite and Bushido was soon playing all over. Tim spent his days working at Chicago Recording Company, sharing the same recording space with the likes of R. Kelly and Smashing Pumpkins among others. By working alongside some of Chicago's most well respected engineers at CRC Bushido honed his engineering and production prowess until opportunity knocked.  While Bushido was mastering his craft, Santiago was working his way up the Chicago's nightlife hierarchy. Within one year of playing live gigs, he secured a Friday night residency at Zentra Nightclub. The renowned Jack Fridays have continued to attract underground house crowds for more than six years, with crowds still going off weekly. Santiago's presence in the Chicago house community reaches even further with his involvement in the House Arrest promotion group, which continues to host some of the scene's most well attended parties. As producers, Santiago & Bushido draw influences from their straight house background and apply harder and heavier elements to the sound. "We get really deep into the tracks we're producing, flip them and cut them in so many different ways, all to get the heaviest groove possible," Bushido says. Since collaborating, they have dropped numerous EP's and remixes on some of the most well respected labels around including Potty Mouth, Om, Robsoul, Control and Black Cherry. The innovative production of Santiago and Bushido has been creating a huge buzz as of late. The duo's "For What" ep on Potty Mouth Music was released to critical praise and support from dj's across the globe including Switch, Jesse Rose, and Johnny Fiasco. Their single "Head Trick" climbed the charts on Beatport.com, the world's top online site for electronic music and held the number one spot for a few weeks. In addition to belting out club tracks, Santiago and Bushido have been involved with Chicago native Colette's 2007 artist album Push for OM Records. They wrote and produced multiple songs on Push including the album's single "If" which has been licensed for a future episode of Real World for "MTV" and can also be purchased as a ringtone from Verizon.  "One thing about us is we're not afraid to do a deep track or a totally hardcore track…as long as it works on the dance floor and is pushing the sound forward, it works for us." Given the tech-funk inflection of their forthcoming release, the nastier the duo delves, the better they beat.