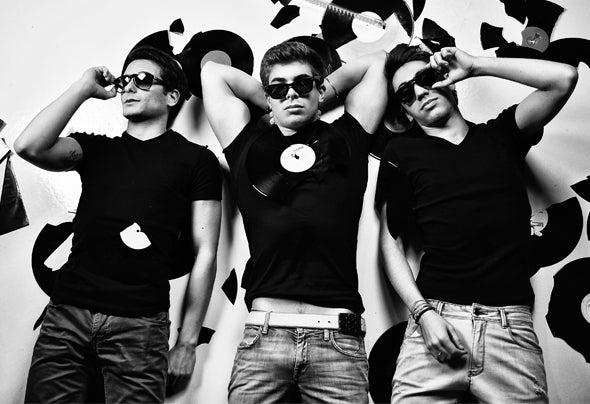 We're Filippo, Riccardo and Ruben, A.K.A. "re:GAIN", a trio of artists fruit of the Bolognese countryside. The idea to mix with "four hands" before and "six hands" after was born during the summer 2009, on a warm evening of August, and has come back over and over again, until in January 2010 we decided to take everything seriously...After the initial apprenticeship in various clubs, such as "Fresh" and "Ruvido", and after the selection of one of our mix, we participated in the final contest of Radio Playstudio, held on 18 December of the same year at the "Vie En Rose" discotheque (Imola). Resulting as the competition winners, the broadcaster aired some of our sets within the "Play DJ" and "Playstudio Notte" radio shows.With the support of our friend and music legend DJ Panda, we were "adopted" by the boys of Synklab, working and playing in some of their winter events.On 10 March 2011 we have been decreed winners of the AM Productions DJ Contest, an international competition, and our winning mix aired May 1st, 2011 within the "Play DJ" show.Summer 2011 has been for us a period of reflection on our future, which has allowed us to broaden our horizons, improving both live performance, whether we launch into production, and collaterally to develop, starting in June, our first radio show, "DJ Power", which aired every Saturday night on Radio Playstudio until the beginning of January 2012.This year has started out well by taking a close collaboration with the "Eventeria", who trusted us and gave us immediately a slot in the evening held at "Link", on February 24, with main guest Paul Van Dyk.After getting in touch with some members of the label "Slow Deep Records", and having visited their recording studio, we decided to approach firmly to music production, which has led us to release, right on Slow Deep, our first EP, "Call To Arms", our last November 9.Our second EP, "Dark Moon", has been just released on No- Logik Records (on 22/04), also containing a remix by Daniele Petronelli!