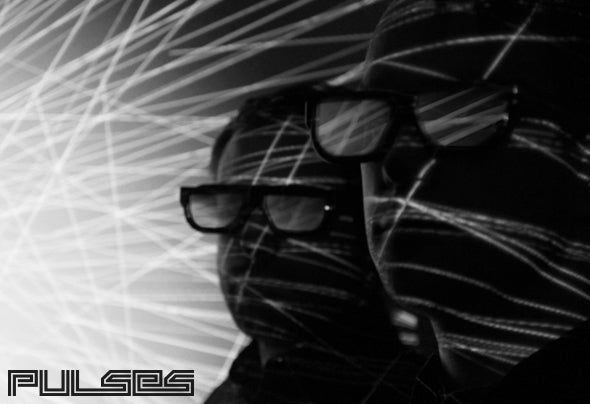 The duo known as Pulses and its enigmatic techno experience is the product of a thoroughly Montreal connection between the talents and visions of Dom Dumoulin (formerly known as Snork) and Patrice Tremblay (64hz Collective’s DJ Bushido), who allied themselves to prolific visual artist TiND in order to create an immersive audio-visual experience where perception gives room to an harmonized environment of sounds and images designed to stimulate a collective introspection.Without a doubt, the synthetic ambiance of techno music is the mystic laboratory for this experience. A musical environment straight out of the old guard, as attested by the choice of analog textures and minimalist structures to maximize the effect. This strange and futuristic ambiance has been redesigned and reimagined to create a new portrait framed by the resonance of its authors’ influences and imaginations. This amalgam borrows its atmospheric layers from dub techno and inserts them in a deep repetitive progression. Within this space, inside the cold interstellar ambiances of drone music, imperceptible charges build up to a momentum which then crashes with the inexorable strength of techno music.At the heart of this interstellar music, mysterious and subtle melodies provide a waving and undulating thread akin to a secret code, allowing for the ritual celebration of a timeless music.Collaborating with a visual artist of TiND’s caliber came about its own when it was time to create the visual side of Pulses’ music. The visual elements created by TiND attaches themselves to Pulses’ musical organs, giving them the cinematic face they need to express the totality of the enigma. Synthetic images explore the strange meanders of a whole other universe, seemingly blurring the linesbetween nature and manufacture, suspended in an unknown space yet expressing in an aesthetic form the eternal paradox between the infinitely big and the infinitely small. Other images show a glimpse of the abstract form of the electronic architectural planning spawning the landscape of this fantastic world unveiled by the rhythm of the musical score.T his all creates an experience which, while overwhelming the senses, brings the participants back to the essential themes of genesis and the origins of time and space and, through its aesthetics, expresses the enigmatic phenomenon of the human being and its strange existence.