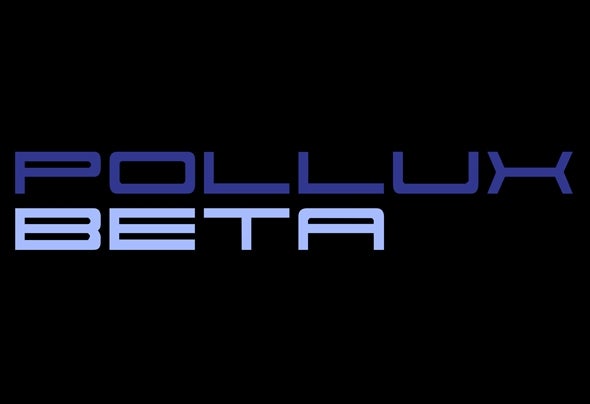 Pollux, also cataloged as Beta Geminorum (β Gem / β Geminorum),is an orange giant star approximately 34 light-years away in the constellation of Gemini (the Twins). Pollux is the brightest star in the constellation (brighter than Castor (Alpha Geminorum). As of 2006, Pollux was confirmed to have an extrasolar planet orbiting it. Announced on June 16, 2006, the confirmation of the suspected extrasolar planet Pollux b was finally detected. Assuming that Pollux has more mass than the Sun, Pollux b has been calculated to have a minimum mass of 2.3 times that of Jupiter. The planet orbits Pollux at an average distance of 1.64 astronomical units in an almost circular orbit that takes approximately 590 days to complete. Pollux b is currently one of the few planets to be orbiting a star that is visible to the naked eye. The planet is also the only confirmed planet to secure the traditional name of its parent star. Pollux b, also cataloged as Beta Geminorum b (β Gem b / β Geminorum b) and or HD 62509 b, is an extrasolar planet approximately 34 light-years away in the constellation of Gemini (the Twins). This planet was discovered orbiting the star Pollux in 2006. The planet has a comparable mass to the gas giants in our solar system. It moves around Pollux in 1.61 years at a distance of 1.64 AU in a nearly circular orbit. This planet was originally suspected in 1993, and it wasn't published until June 16, 2006.ht t p://en.wikipedia.org/wiki/Pollux_b