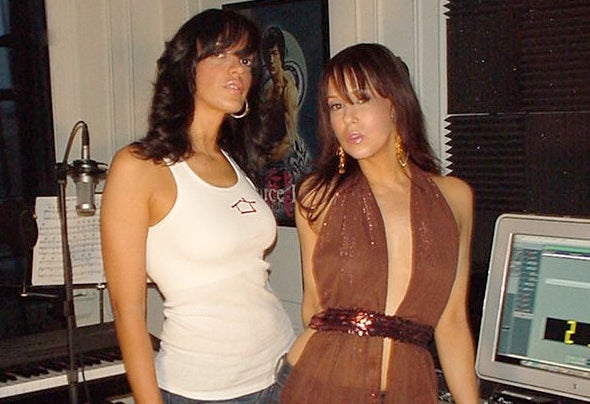 PERFECT PROJECT is an electronic/chillout project based in New York City. It is the collaboration between NYC-based DOT BUSTELO (producer/keyboardist) and CICA (vocalist,songwriter) born in Athens,Greece. Dot was a music programmer for TV-series such as “One life to live” and “As the world turns”. Dot and Cica first met in the Boston hip hop/house group Soultech. When the 7-piece ensemble disbanded the two girls vowed to continue developing their own unique sound. The duo has reached significant popularity in the underground soulful lounge scene worldwide.PERFECT PROJECT is sophisticated urban downtempo lounge music. The signature sound of PERFECT PROJECT is best experienced in the classic singles, ”I Love Lovin U “,Late Nite” and ”Give It To U”. “I Love Lovin U “’s viral popularity grew after being licensed to Dell-computers and then in dozens of home videos released by fans on YouTube, leading to a feature on the American “TODAY TV-SHOW”.The girls developed their underground following with independently digital released EP ’Café Sessions’ that found its way upscale boutiques on 5th avenue as well as café and restaurants in NYC, spreading to urban lounge scenes in Boston, Chicago, Atlanta, Miami and London.PERFECT PROJECT songs were licensed to numerous companies such as, Sony Playstation ,NBC, Nokia, Dell- computers, the New York Fashion Week and various international CD compilations such as the latest release of IBIZA BEATS ’Sunset Chill&Beach Lounge’ Vol 5 on Silver Angel Records.Still recognized for their unique and sexy live performances at NYC’s and London’s hottest lounge and nightclubs. PERFECT PROJECT ‘s studio releases and new beats cut perfectly in and out of any DJ-set. Everything about this project spells out the true interlude of the after hours!All PERFECT PROJECT favourites are now released on their first physical album “Soul-Drenched Lounge” by Silver Angel Records.PERFECT PROJECT is sexy vocals and new beats! Hope you enjoy your discovery of PERFECT PROJECT.