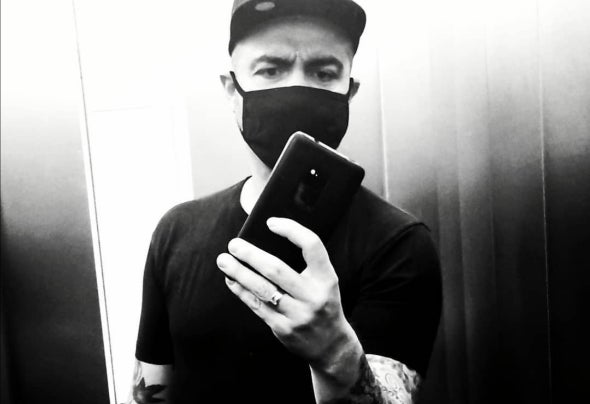 Bío /P.T.B.S. /AFFLICTED/Ufuk Özbayar It's the 90s. Influenced by mainstream Radio Pop as well as a growing SynthPop scene and the emerging, ever present HipHop sound of the era a young, thirteen year old named Ufuk Özbayar, now better known under his MONIKER AFFLICTED, P.T.B.S and OKTAL3., (and many more) starts to get involved in nightlife business. But with the decade progressing and electronic music being on the rise towards its first peak it wouldn't take long before the original HipHop head discovered the magic of a straight 4/4 bassdrum and a variety of styles including Trance, House and HardHouse only to progress into serious Hardcore, Acid, Gabber and HardTechno over the years, influenced by acts like Sven Väth, Luke Slater, DJ Rush, Chris Liebing and the likes of as well as countless club nights experienced all over Germany. Fast forward a few years. Despite being a dancer and dedicated punter still Ufuk Özbayar / P.T.B.S. runs a venue where he successfully throws both HipHop as well as Techno / TechHouse events around 2008 and has played several undercover DJ sets in the Netherlands, mostly employing one-off monikers and made up DJ names. Another decade later, the love for the music has evolved and P.T.B.S. focus shifted from running venues and DJ'ing towards studio works, carving out his own musical niche as dedicated Techno, HardTechno and Acid producer over the past years whilst teaming up with long time producer Sascha Müller for several releases on many Labels (INDUSTRIAL TECHNO UNITED, CHERRY MOON RECORDS, MEPHYST, RED Channel, NUON, PURE DOPE DIGITAL, BANG LE DEX ACID-606,2 NAME ONLY FEW) which have put the Uelsen-based artist on the map internationally, paved the way for a bright future and more thrilling P.T.B.S. music works to come soon – surely blasted through a massive club P.A. near you.