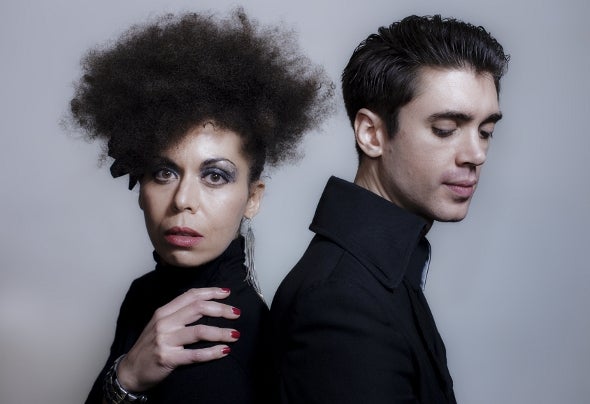 Pulsating with raw passion and a desire for anthemic melodies, Berlin based Noblesse Oblige have crafted their most polished and unapologetic work to date. New album release 'Affair of the Heart' presents a sophisticated pop opus, destined to unite the ears of dance floor dreamers and bedroom escapists alike. Powerful male & female harmonies melt over an ocean of warm electronics, voluptuous dance floor beats and euphoric disco arpeggios, as you’re welcomed into a rich fantasy world of exotic spies, demonic preachers and lonely souls lost at sea...“Affair Of The Heart is a romantic journey in the classic sense of the term. Our study of human passion from its most uplifting to its gloomiest...”Formed after a chance meeting at a masked ball in London, French performer Valerie Renay and German producer Sebastian Lee Philipp have spent the last few years touring the European club circuit, picking up a Russian Music Prize for their chanson pop album ‘In Exile’ along the way...However, when it came to working on their latest release, the duo locked themselves away in a live-in factory on the outskirts of Berlin (at studio haven ‘Turmwerk’, founded by Chris Corner of Sneaker Pimps/IAMX.) Undisturbed by the rest of the world, they collaborated for the first time with mixing engineers David Wrench (Caribou, Bat For Lashes) and Harald Bluchel (Cosmic Baby, Energy 52) in order to bring a fresh dimension to their sound.The result is an album that defies the isolation it sprung from and instead, shoots straight for the dance flloor and into the soul. Harnessing pop sensibilites and a slick electronic production, ‘Affair of the Heart’ recalls the emotional energy of iconic 80s bands like Eurythmics, Tears for Fears and Depeche Mode, whilst also reaching out to fans of more contemporary favourites like Hurts, The Knife, Austra and Trust.It’s a far cry from their arty beginnings in London's electro-punk scene, but if the album’s chilling and hypnotic cover of an Eagles’ classic demonstrates anything, it’s that not only are Valerie and Sebastian braving new territories; they’re creating their own as well..."As an artist, you never know how the music will sound after you leave the dream world of the studio, and how it will translate into the real world of the listeners. The many moments of joy, the countless late nights we spent in the studio, and passionately worked on our music, remain particularly fulfilling moments in our memory. I hope that this energy and emotion are felt by the outsiders, and will entice them into our world...”In short, Noblesse Oblige welcome you to share the pleasures of their new found pop universe. An invitation no one should refuse.Artist Bio