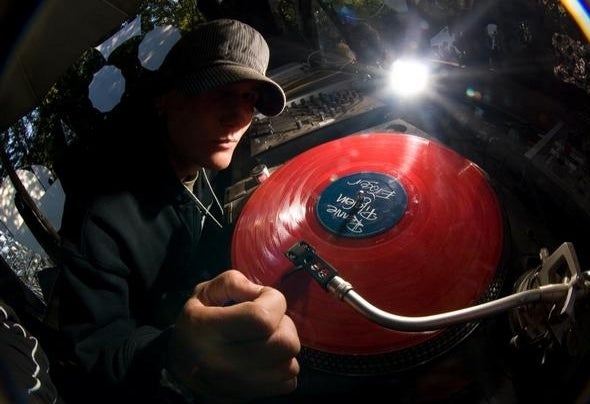 Few Breaks artists can say that they have remained true to the sound for as long as RFR president Chris Jackson aka N.U.D.L.Z. Spawned from the acid breaks and big beat sound of the mid to late nineties and helping to pioneer the New School breaks sound into the new millenium. Chris has been eating breaks for breakfast lunch and dinner for close to 15 years and still running. A history that begins in the after hours clubs of Vancouver where he earned his name. At the age of 19 Chris had three roommates who were active DJ's, and the only way he could get some turntable time was when he'd cook up a massive pasta dinner for the crew. Friends filling their faces, our young breaker now could get on the decks and practice.BREAKfeast was the name of the thursday night after hours club that made him his name in the industry and the gigs came rolling in. At the time there weren't very many 'Breaks' Dj's and the sound was fresh to many ears. Chris began doing regular out of town shows all across western Canada. All this time he kept a secret weapon locked away - his alter ego M.C. Sweat. He hosted the main stages of TWISTED PRODUCTIONS and was resident M.C. for D'OH BOY productions for many years, dropping live vocals for the likes of MISTRESS BARBARA, CHRISTOPHER LAWRENCE, ROBBIE HARDKISS, KLUBHEADZ, DJ ICEY, DEISELBOY, CZECH, and many many more. This led to the eventual meeting with HARD ON MUSIC and recordings with breaks producer 'GTM'. The label dropped the 'HYDROMECHANICAL ACOUSTICS ep' in 2001, which was followed by a north american tour.The success of MC SWEAT and GTM's tour led to many spin off gigs for N.U.D.L.Z. including a headline spot at 2002 THE PARTY in Paihia New Zealand, several peak time time slots at the world famous SHAMBHALA MUSIC FESTIVALS spread out over 10 years. After the unfortunate day that HARD ON MUSIC closed it's doors forever and GTM moved on to become a sound designer. Chris began releasing independent mix CD's and singles under a new label - RFR and continued to push the new skool sound throughout, always following his releases with a western Canadian tour. 2003 he was awarded a free pass the the WMC in Miami after dominating in a dj competition, mixing and rapping simultaneously over his own music! 2005 He teamed up with female breaks dj MILITIA and the two quickly bonded and formed the dj duo known as THE DESTROYERZ, hosting regular radio shows on NSBradio and club events. They stormed the FRACTAL FOREST in 2007, and that was the last show they played before giving birth to their daughter - whose initials spell - 'CDJ'It wasn't until 2008, after completing his professional recording training at COLUMBIA ACADEMY that the RFR label really began to take the shape of a proper business. With a family on his hands Chris made many sacrifices in order to fulfill his duty as a father. Now was the time for him to take on an administrative stance in the music scene he's dedicated so many years of his life to. He and MILITIA continue to host regular radio shows on IBREAKS RADIO, showcasing the music from RFR and more from across the nation .Still able to produce music and nurture the talents of the next generation of artists, the contribution to our scene made by N.U.D.L.Z is an ongoing achievement to be respected.