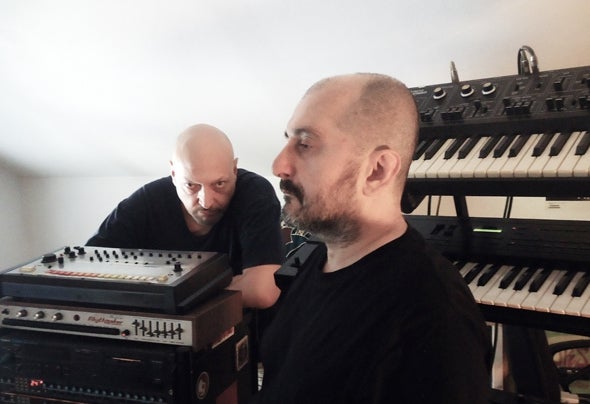 Bruno Magnani and Davide Piatto were among the founder members of N.O.I.A. in 1978 and they stayed with the group until it disbanded in 1988. N.O.I.A. were probably the first Italian electronic group and if their music was filled with echoes of early Kraftwerk (daddy Ralf and daddy Florian), it soon developed its own original style, preceding the British electronic musical experience of the early 80s (Depeche Mode, Human League, John Foxx, etc...).The career of N.O.I.A. is split clearly into two parts.During the first part, the band was made up of five members and the music and lyrics were completely innovative, repetitive and absurd.Tensions inevitably developed during their concerts, often leading to fights among the part of the audience that was having fun and enjoying the music, against the other half, which couldn’t stand them.They won the first Italian rock festival in 1980 but, for reasons relating to public order, were unable to climb back onto the stage at the end of the event.EMI published a compilation containing two of their tracks "Europe" and "Hunger in the East”.N.O.I.A. part 2 began in 1983, when they signed a recording contract with Italian Records, owned by Oderso Rubini and Giovanni Natale. They became a studio band, cutting their members down to three and almost entirely eliminating live performance. Their music became more accessible, although they did hang onto their characteristic obsessive repetitivity.Between 1983 and 1985 they released the singles "Looking For Love", "Stranger in a Strange Land", "Do You Wanna Dance", “True Love", "Try and See" and the miniLP "The Sound of Love", which were fairly successfully on the Italian, German and Belgian dance markets.The band slowed down after '85 and just two singles were released between then and ’88: "Umbaraumba" for Walter Mameli’s label Rose Rosse and "Summertime Blues" for CBS, produced by Jay Burnett (sound engineer on “Dream Baby Dream” by the legendary Suicide). During the same period they recorded the track “When She Comes” produced by David Jacob (already with the Pet Shop Boys) at the studios of Mario Flores in Rimini.Incredibly it was lost and never found again.While this was happening, Davide Piatto founded "Rebels Without a Cause", a classical rock-blues band in which he was finally able to give vent to his talent as a guitarist. The Rebels had a certain amount of elitist success, frequently performing live, and released three albums between 1987 and 1990: "Naked Lunch", "Why Don't You Die?” (produced on the “Electric Eye” label which belonged to journalist and (then) editor of the monthly “Rockerilla”, Claudio Sorge) and “John's Comin' Down”.At the same time, Bruno Magnani formed "Sacred Circle", who combined a strictly electronic rhythmic base with the aggressive and squealing noise of two electric guitars. Sacred Circle did just a few excellent gigs. There sacral- porno sets are memorable.Nothing interesting happened from 90 to 94. Magnani and Piatto would occasionally work together in the studio but, unfortunately, churned out just a few tracks that were never released.In 94 their music changed and the electronic bases became increasingly overlapped with samples of traditional African and Asian music. “Holy Hole” was born. Their style was refined and “global” interventions formed the very structure of the tracks, infiltrating the trance-dub rhythmic bases until a personal and immediately recognisable sound was created. “Holy Hole” played a few gigs and recorded an album which was never released.At the end of the 90s, Bruno, Davide and his brother Alessandro decided to record the N.O.I.A. tracks dating back to 78-82, maintaining the sound and instrumentation typical of the time.The album was released in 2003 on the Ersatz Audio label, managed by the Detroit duo “Adult”, under the title “Unreleased Classics 78-82”, and was received fairly well by critics, especially in the States.Over the next few years they did a few gigs and some occasional studio work. In 2006 they worked with “newcomers” “Franz & Shape”, who were from the same town, releasing the track “The Man Who Paid Before” on the Relish label.In 2012 Alessandro (Piatto) decided to rerelease the old catalogue in chronological order, with new recordings, adding new tracks and remixes. The idea behind it was the same as for “Unreleased Classics 78-82”, i.e.: the “philological” use of the same instrumentation and mixing style used on the originals.