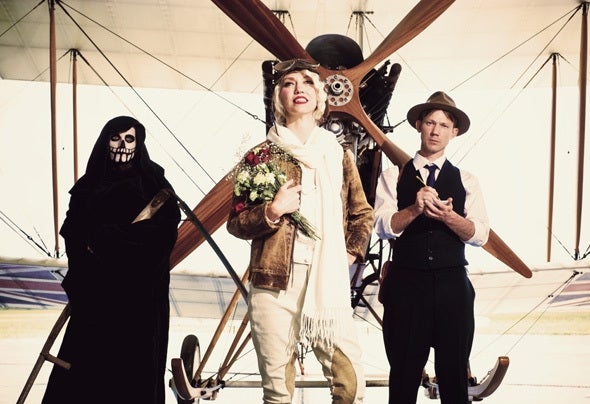 Minuit has a heart. And it beats loud. Real loud. And they like taking a risk.Touring their synths and samplers from Hanoi to Helsinki on the live circuit for over a decade, Minuit have forged their own path amongst an ever-changing global dance music scene; leaving the signposted industry trail in favour of a more intrepid itinerary.Ruth Carr mixes sinister with salvation in her lyrics, while bandmates Ryan Beehre and Paul Dodge deliver rib-rattling, hip-shaking beats around them.With four studio albums and multiple remix EPs in their catalogue, the Kiwi band with the French name (they kindly add the pronunciation to their posters...”minwee”) have shown they are unafraid to evolve their beats, instrumentation and style, while keeping their sound undeniably Minuit.Debut album T he 88 went gold in 2003. Followed up by the limited edition sold out GUNS EP. Since then Minuit have toured far flung venues from St Petersburg to the Czech Republic; storming The Crystal Method's DJ night in Los Angeles; playing the hotel where Tarantino wrote Pulp Fiction in Amsterdam; and headlining the Hanoi Festival in Vietnam.Describing their third album Find Me Before I Die A Lonely Death dot com, Rolling Stone magazine said: “despite an album title as dark as midnight, Minuit's music is often as joyful as a fat kid with cake.”The smouldering groove of track 'Aotearoa' has haunted many festival stages as well as US TV shows Bones and Being Human, while the album track ‘I’m Still Dancing’ was used in an episode of Grey’s Anatomy.A selection of European remix vinyl releases on Dollhouse Records UK had them invited to perform a 30-minute live set for Annie Nightingale's BBC Radio 1 show.Summer of 2011 saw Minuit join forces with a 15-piece traditional Balinese gamelan for two explosive percussive sets at WOMAD and HomeGrown Festivals.A trip to Rarotonga by Carr, swapping her carpentry skills for scuba diving lessons, inadvertently led to Minuit’s fourth album Last Night You Saw This Band. Living cheaply, and simply, she found inspiration in the way of life, and returned to record an album as eclectic as it is hopeful, featuring the sounds of the islands, tribal percussion, gypsy brass, mariachi horns, and voices of the children from a Haitian orphanage.The band used kiwi crowdfunding platform PledgeMe to press a double-vinyl version of the LP, and the project hit it's funding target in under 11 hours. It is no wonder then that their latest album is full of references to risk, adventure and the unknown. “We gotta go we gotta get off this island, follow Kupe on water sparkling like diamonds,” shouts 'Islands', an ode to the Pacific, home country New Zealand and the search for destiny and undiscovered new prospects.With a sound as addictive as it is distinctive – it's Minuit.