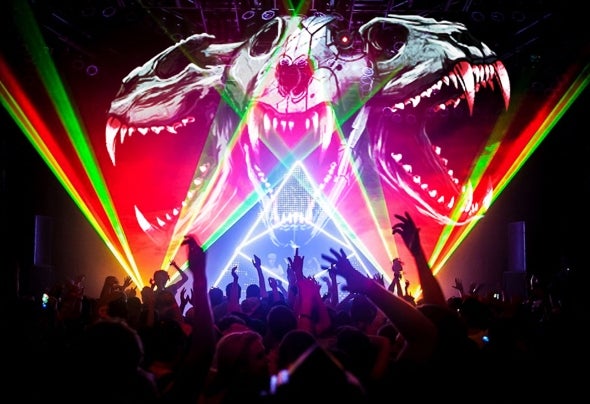 From behind the sixteen foot laser and LED structure dubbed "Eye Live," Midnight Conspiracy emerges as a riddle, wrapped in a mystery, inside an enigma that will literally overload your senses and still leave you coming back for more.When t he dark, moody, and even ominous undert ones of their hard-hitting, no-holds-barred bass drops and harmonic melodies lift, you'll be left pondering a few things. What is the Midnight Conspiracy? Who is behind it? Where did the last two hours of my life go? These aren't questions that we can answer for you. These are questions that only you can answer, and only after experiencing Midnight Conspiracy live. Here's what we can tell you:Throughout history, imagery of "The Eye" has been associated with everything from secret societies to ancient deities, but Midnight Conspiracy is concerned with something much different: using an out of this world light show and their own special blend of heavy bass to put on an unforgettable show. It worked. They're signed to the legendary Ultra Records, which is also home to favorites like: Deadmau5, Bloody Beetroots, Wolfgang Gartner and Benny Benassi. In addition to the DIY endeavor that is the "Eye Live— Laser Light & Heavy Bass Experience," they also started the art collective and clothing line Dead Fame. They've risen to the top of Hype Machine, Beatport and BBC Radio 1, along with destroying stages at Lollapalooza and Ultra Music Festival.Is Midnight Conspiracy a collection of heavy bass, mixed with electro and topped with dubstep? Or, is it some sort of mystical, musical chimera with a singular goal of putting on the best show you've ever experienced? Or, is it a perfectly produced musical narrative that evolved into live instrumentation and ultimately into a sixteen foot bastion of laser lights and brain-melting bass? The correct answer is all of the above, but "The Eye" commands something else entirely. Put yourself in its gaze at a show and get inducted into the Midnight Conspiracy.