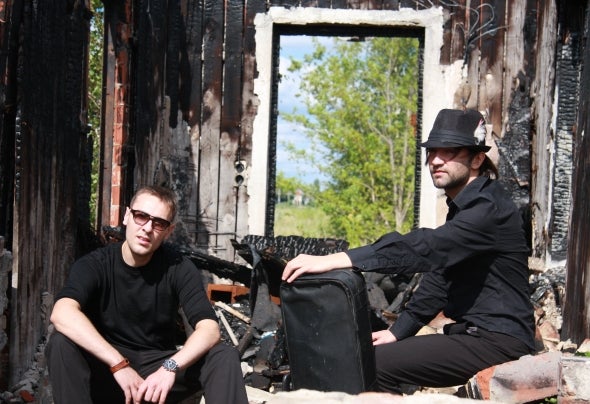 "Marco und der Geigenmann" is Marco Perschon and Artiom Ordiyants - both couldn't be more different ... Artiom was born in 1983 in Turkmenistan. When he was six years old he started to play the violin. At the age of ten he and his parents moved to Moscow where he studied music at the highly renowned “Piotr Tschaikowsky” music school for the next 8 years. In 2001 he moved to Germany where he successfully graduated from “Universitat der Kunste” (UdK, Berlin) and achieved his music diploma in 2010. During this time he had an engagement as 1st Violine at the “Deutsche Oper” Berlin. At the moment Artiom is working on his concert exam at the UDK. Among others, Artiom won the 1st Price at the “International Music Competition” in Moscow (1998) and in Athens (2000). Marco was born in 1983 in Berlin where he was highly influenced by the electronic music scene in the 90’s when he was still very young. For a couple years now he works as a music producer himself. Since 2008 he is part of the Berliner Techno project “Klangstruktur Ost” (www.myspace.com/ksomusik), which was founded in 2005. In March 2010 one of his remix projects (Mizumo Music – Vibe “Klangstruktur Ost Remix”) made it into the “Best of Minimal March 2010” Beatport Charts. In April 2011 he finished his “Audio Engineering” studies at SAE Institute Berlin. At the very beginning “Marco und der Geigenmann” was more an experiment, than a self contained music project. Both needed a while to get used to each other and accommodate two totally different worlds and views of life. At last it was their irrepressible passion for music that brought both of them together. To Marco and Artiom it was very import ant to create something new and exceptional. After they finished their first album they started to work on a live performance. While Marco is playing his bumpy Techno beats through the club speakers Artiom contributes his part to a project which stands for the future of an international music scene where the cooperation between different artists is becoming more significant than ever before. While recording the classic tracks, Artiom performed with a “Guadagnini” violin (1753, Cremona). At present Art iom plays a “Guarneri” violin (1687, Cremona).