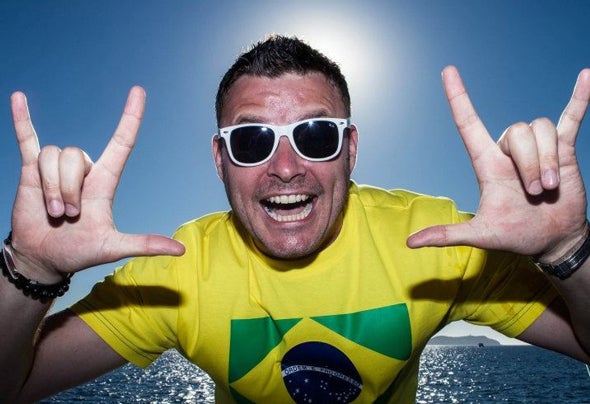 In the summer of 1990 Mallorca Lee formed seminal rave group Ultra-Sonic and quickly went from playing illegal raves to headlining every major dance event around the world before many of today's "super star DJ's" had even mixed their first record ! He continued to do so with global chart toppers Public Domain in 2000 until he left the band to concentrate on his DJ'ing and solo productions and record labels in 2003. Mallorca's first ever professional DJ gig was at the infamous Ministry of Sound, London in 2001 !From busting rhymes with rap legends Chuck D & Professor Griff (Public Enemy) during the London riots to supporting Tiesto each time he arrives in Scotland, closing his sold out - Kaleidoscope Tourin 2010 and Scotland's biggest annual dance festival Coloursfest in 2011. The self confessed "Tekno Junkie" openly sites Hip-Hop & Acid House as his Rock & Roll !This multi-talented madman has sold over 5 MILLION records worldwide, released over 10 artist albums and countless singles that have blazed an unmitigated trail thru acid, house, rave, trance, hip- hop and the harder side of dance for over two decades. He has played in New York, Tokyo, Ibiza, Russia, New Zealand, Budapest and Germany just after the fall of the Iron curtain and toured Australia an astonishing 17 times, making him one of Scotland's most enduring and ground breaking DJ / Producer's in E.D.M. Mallorca maintains a unique Punk rock approach to both DJ'ing & music production that has helped blow up the boundaries and pick locked the pigeon holes of modern day dance music !His hi-octane DJ sets consciously ignore musical divides, charging into the future while embracing the past, fearlessly mixing up his classic productions at the massive Back To The Future, Fantasylands, Fantazia events, upfront live setsat Coloursfest, Planet Love, Homelands, Creamfields, InsideOut, Gatecrasher and even smashing the main rock stage at theinfamous Reading & Leeds Festivals. Even NME proclaimed him "more rock and roll than Oasis! ". Could he even be the voice of our RAVE generation ?Its not only in the Harder side of dance Mallorca has applied his talents, mixing 7 hour House set's each night at his now legendary DON'T DELETE Weekenders in Beduin, London - now in its 8thyear. He also signed to Eric Morillo's uber cool Subliminal Records as part of Scannersalongside David Forbes. Their indispensable, vinyl only Debunk Music Imprint harbours some of the best producers in House music (Steve Lawler, Deepgroove, D.O.N.S. Mike Monday) and their Trance label Red Monkey Records signed and released the first ever recordings from Signal Runners and Mark Sherry.In 2008 Mallorca launched MLXL digital tocontinue championing new and exciting artists from Scotland and around the world (Dave Walker, Will Atkinson, Ally Brown, Stephen Kirkwood, Joey V, Fabio Stein, Gary McGuire , Liam Melly, DJ Choose, Mac & Taylor, Tigran Organezov) alongside his own productions which have gained rave reviews in MIXMAG, DJ MAG & IDJ. His debut solo album XL (2010) and XL:Remixed (2011) were supported by just about every A-list DJ. worth a mention, Mallorca's brand new studio album "COMPUTER GAMES" is set to drop early 2013. not forgetting his monthly XL Podcast's that gains thousands of new global listeners with every episode.As 2012 draw's to a close the DJ voted No.1 in 2011 Vestax Scottish DJ20 Poll, Mallorca Lee shows no sign of slowing down, just check out any of his unpretentious, adrenalin charged DJ sets, bursting with heart felt passion every weekend and you will quickly realise how he won his way into our head and hearts, not to mention your record collection, in the first place.