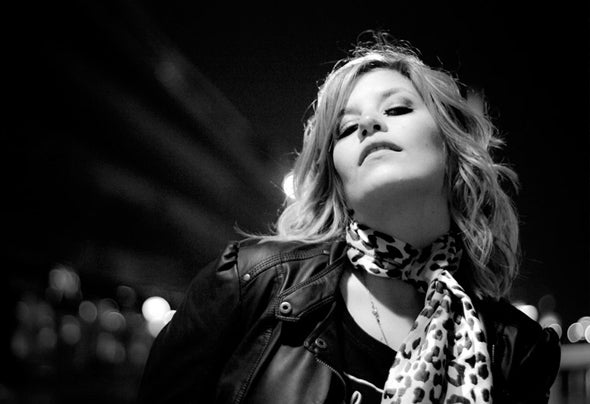 Having been born in Buenos Aires, Laura Seh grew up listening to bands like Depeche Mode, and some years later she began to be interested in the electronic sound. 2005 was an important year in her career. She decides to begin to play and begins to learn to play music in Sonica (Important electronic music school from Argentina) With some teachers like Romayn and Hernan Paredes she learned to mix music and how to use effects in live performances, as well as to choose music for her gigs. Under the influence of artists like Hernan Cattaneo, Sasha, John Digweed and others she decided to create her own style, varying between House and Progressive House with Tech sounds. Starting to play in private parties organized by friends and some places like JACKOS CLUB, FRERE and others in Buenos Aires, in 2006 with her second mixture, Laura Seh obtained a place among the best 30 new DJs of Argentina in the competition DJ MIX 2006 of the association of DJs and illuminators of Argentina www.adisc.org, participating in the semifinals. In 2007 she was present in SAMC (South American Music Conference) with ON MUSIK Record Shop and Sónica School of Electronic Music, and started her residence in KSK RADIO FM 101.9 (www.kskradio.com). She was also invited to several local and Int ernat ional radios like DLA (www.dancelatinoamerica.com), BEATBOX (www.beatbox.fm), FM Beat (www.fmbeat.com), FRISKY (www.friskyradio.com) and KISS FM 100.6 (Greece) catching the attention of the public. But that was not all, and following her career she decided t o begin producing t heir own t racks wit h tools such as Reason and Ableton Live, and in November was invit ed by MINT t o play in t he warmup with Billie Ray Martin at the anniversary celebration. Trying to make something different, the blond girl started the year 2008 with a new project with her friend Dj RoMix, who she had met the year before. 2007 found them as partners on KSK Radio, each of them having their own show at the station. During that year it was Laura who opened the prime time of the feminine day of this famous radio station from Buenos Aires with her show Girls Just Wanna have fun. Just after Laura Seh’s show, was RoMix with Anna Maria X and Onirika who hosted High Gloss Girls in the same station. A great affinity in their musical taste and, at the same time, a big technical difference made them think: “what would happen if we joined in a dj booth?” The answer came quickly as after just one month they released their first dj set as FeMMes on DecKs. They made their official debut at Big One, one of the most important clubs in Buenos Aires, for 1500 people and had an excellent crowd reaction. After that moment, one success came after another, starting the year with multiple offers and invitations: magazines interviews, radio shows like Women on Top at www.danceradio.gr hosted by them and some guests on famous radios such as Frisky Radio and Proton. They also played in different parts of the world and in the most popular clubs, such as Big One, Bahrein, Amerika, Privilege (Buenos Aires), Sobremonte and La Caseta (Mar del Plata), Oxigen, Voodoo, Club Fire (Mendoza), La Boite (Tucumán), Una Club (Porto Alegre, Brazil), Oceanía (Medellín, Colombia), Blues (Quito, Ecuador), The End (London, UK) and 1 Lounge (Pune, India) among others, sharing the stage with well known djs like Jody Wisternoff, Martin Roth, Sultan, Miss Nine, Dale Anderson, Tim Andrensen, Lemon8, Nic Fanciulli, Ondrej, Echomen and many more. Their live performances are special for being a back to back between 2 girls, with different musical styles during the show: from tech house to progressive/techno, adding a great variety of sounds and loops from a Mac with Ableton Live. As if it were not enough, these girls can not stop adding extra value to their shows and they aren’t just djs but vjs as well. With a second mac they started to make their own visuals offering an extra bonus to the crowd in each of their performances. At present with some releases by Keep On, Bonzai Music, Red Hammer and Frisky Records Laura together with RoMix started a new radio show. With the support of Frisky Radio “High Heeled Geeks”is on the air every second wednesday of the month at 3PST (Frisky Time). You may wonder why they call themselves “Geeks”. That is because the word geek is a slang term used to refer to the person fascinated by technology, with a social life irrevocably linked to the internet as well as their free time. Electronic music is in the geek world up today, and every day new devices and software are released for doing weird and awesome things, so in a way, FeMMes On Decks are two geek girls. In continuous evolution and with a female instinct, they use the best of the techno advances in their performances but with a different fashion touch.