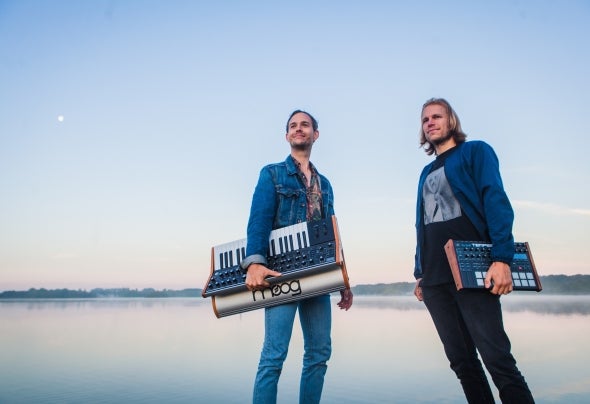 Few electronic acts give meaning to the word ‘live’ the way Lövestad does. Their performances are so dynamic that even the Panorama Bar in Berlin took note, booking them for one of their very first shows back in 2015. Since then, the duo’s signature performances, pumping groovy futuristic disco and emotional house out of a big stack of analog synths and drumcomputers has caught the eye of the world. Their unique shows have earned them gigs at Amsterdam’s Royal Concert Hall, Fusion Festival, renowned nightclubs like Katerblau, Hive Zürich, Klein.Garten in Istanbul, a hosting at De Marktkantine (with invites like Session Victim and Paul Woolford) and their own concertnights where they perform three-hour improvised livesets. Just recently they have released their 'Miles EP' on Freerange Records. Sjors and Jørgen rst met each other at a house-party in their hometown Amsterdam. Clapping along to the same Herbie Hancock jam they recognized their overlap in musical tastes. Quickly after, the guys decided to dive into the studio together and never looked back. Five years later, they still have as much fun as they did during that first session. Their infectious energy stands as a testament that the funk is still alive and kicking in electronic music! To really understand their appeal you need to see and hear them play it though, so either catch them on stage or check out their Youtube channel which is full of their explosive live-performances: http://bit.ly/lovestad-footage!