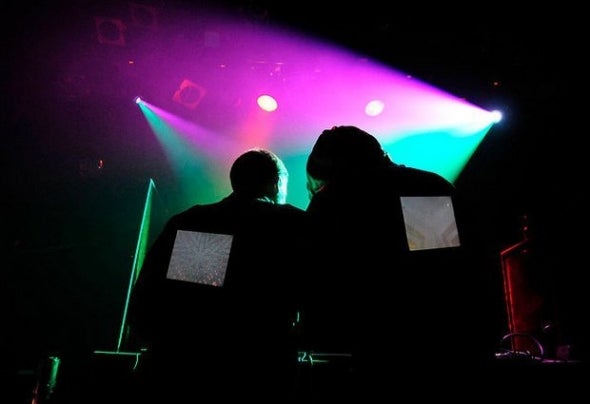 L.A.S.E.R. is an anglo-italian duo formed in Northern Italy during late 2006. The official acronym for their name stands for “Light Amplification by Stimulated Emission of Radiation”, but no one really knows if that’s the real meaning behind it: it’s a mystery that only time will solve. Their productions are heavily sample based and the use of distortions and effects manages to deliver a characteristic sound that can only be described as a flashy electro-rock meltin’ pot. Their journey started as a bedroom project influenced by their own musical tastes: rap meets rock with a funky twist and a pop overtone, all sapiently driven by 4/4 heavy beats. Undoubtedly and deeply “French Touched” by legends such as Daft Punk, their research in the realms of sound continues to this day, always trying to renew themselves and push the musical boundaries of today’s music a little further. Coming from different backgrounds, this eclectic duo combines love for the crowd with an egotistical and very personal choice of sound and modus operandi: their focus is in the music, always. You might see them playing in their pajamas or with a scrawny looking face, but their effort in delivering a powerful yet original ‘sonic attack’ durint their sets is omnipresent, like the “in your face” basslines or mind-bending synths that very often depict their tracks. They are not trend setters nor are they hipsters, they’re just two kids with a passion and a kinky style that might just happen to, due to some bizarre fluctuation in the space-time continuum, blow you away. Their new “Blasteroids” project (in collaboration with the UnlimitedStruggle Family) represents the epithome of their work up to this day, skillfully removing barriers bet ween genres by mixing hip hop wit h elect ro, adding a touch of disco and pouring steamy hot metal infusions all over it.