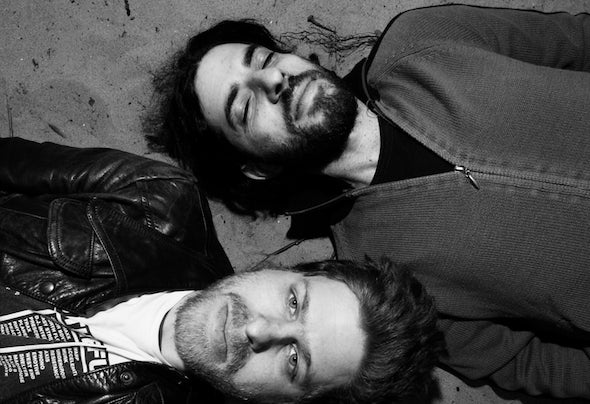 There is no live act as spontaneous and distinctive as Juju & Jordash. Made up of Gal Aner and Jordan Czamanski, the pair use house and techno as a starting point to launch off into the unknown. Rather than triggering pre-made loops or replaying studio works, they are completely free to create on the fly, cook up drum beats, jam out chords and melodies and take their sound wherever they feel fit. From be-bop to acid, dub to disco, they are well versed in many musical languages so often come up with their own distinctive conversations that are musically unique as well as dizzyingly versatile. The electronic duo do so all over North America, Japan and Europe’s key clubs like Robert Johnson, Panorama Bar and Fabric. They also play cult events like Freerotation next to forward thinking arts gatherings like Mutek. As well as this, they have close ties with the Dekmantel family, are residents at their many shows and festivals around the world, and are core producers who release plenty of material on the esteemed label having produced its first ever release. When performing, Juju & Jordash favour a hands on approach that allows them to improvise, manipulate and hypnotise with pumping club sounds or sit down ambient alike, often with a mix of synths, drum machines, guitars and effects units. As DJs, too, they blend many different styles into eclectic selections that keep the energy flowing on the dance floor. In the studio they are just as unpredictable, often losing themselves in the moment and going wherever the mood and the music takes them. It has resulted in three landmark albums on Dekmantel, as well as curveball EPs like Unleash the Golem Part 1 on Golf Channel that explored darker and more experimental sounds, which was also part of a soundtrack to the silent film Der Golem. Add into this a still stunning debut on Psycohstasia and other notable outings on labels like Rush Hour, Ostgut Ton and Future Times next to an array of vital remixes, and you have a rightfully revered discography. On top of all this, the duo frequently link with David “Move D” Moufang for highly in demand live shows as Magic Mountain High. Their collaboration has resulted in a live album on the acclaimed German label Workshop, as well as three other EPs, one of which was released on Czamanski’s own record label, Off Minor. It is fair to say, then, that few acts push the boundaries and breach new musical ground as freely and ably as this essential partnership. “Jazz definitely influences what we do, but more in the attitude than the actual notes we play.”