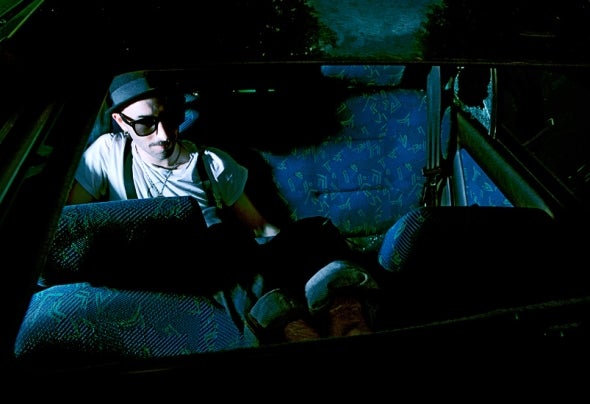 Jesús Vögel is a polifacetic contemporary artist of the “spanish-berliner” electronic scene of last years. Was born and raised in the suburbs of Andalucía (Spain) in winter of ́84 and currently based in Berlin (Germany), left-hander and with a revolutionary philosophy, remains a independent audiovisual creator, respected multi-media artist & international live performer. His charismatic style would be explain like a mix between electronic, rock & visual arts.Could be considered one of the most active and restless minds of the Spanish underground scene, with a unusual, beautiful and disturbing creative work and hundreds of gigs performed in the last years in different countries, from some of the most important venues & international festivals to the avant-garde experimental panorama. Having performed not only in the clubbing scene, also did live sets & showcases in Museums, Universities, TV, Film Academy, Cultural Centers, Science Parks, Convention & Exhibition Centers, Art Festivals etc in countries like Spain, Germany, U.K., France, Poland, Argentina, Bolivia or EE.UU.Multidisciplinary producer, multi-instrumentalist composer, remixer, eclectic DJ and video-artist mainly, although also developer of mixed-media technics (as photography, graphic & motion design, drawing, sculpture or writing) and anti- mainstream cultural promoter/curator of a considerable number of festivals, events, workshops & artistic exhibitions; the big part of that hosted by Cremaster Records, being his founder in 2000 for the promotion of new talents in the music & visual arts scene in the innovative research into new forms of audiovisual communication.