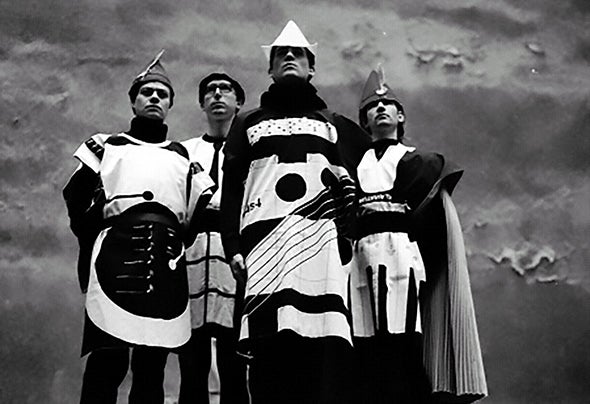 The band JEANS TEAM was founded in 1995 by Reimo Herfort and Franz Schütte who were also active members of the galerie berlintokyo in Berlin Mitte. The galerie was a vibrant place at that time, a meeting point for all kinds of artists and musicians to play music, shows and party. It is also the place where most of their early stuff was recorded as they used it as their studio when it was closed. It didn´t take long untill they recrouted 2 more musicians, Henning Watkinson and Gunther Kreis, who soon became full-on members of the band. Their first Hit "HENNING" was written as an invitation for Watkinson to join in as he was a little hesitating at first. Until today JEANS TEAM has recorded 5 official albums and 13 singles on various record labels including NADEL EINS, ALKOMERZ, KITTY-YO, LOUISVILLE and PLUXEMBURG. Their music varies from minimal punk to electronic pop and alternative dance. They started off producing their music completely by themselves, founding their own music studio called NADEL EINS STUDIO BERLIN which is now a known place for recording, production and mastering. In 2017 they will add previously unreleased albums and singles to the discography as the whole catalogue is brought back with the help of PASSÉ.