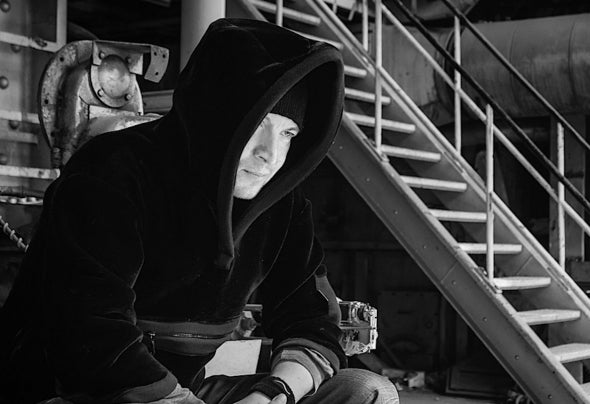 Ionic Benton was born on March, 1st 1972 in the small country Luxembourg. At the age of 8 years he began to play drums.As he grew up he became more interested in keyboards. From this very young age he was fascinated by electronic music and was a fan of Jean Michel Jarre, Kraftwerk and many more electronic music artists.The launch of the legendary Commodore C-64 computer in the early 80's marked the beginning of his musical creation & production. T hen, in order to have more control over his sound producing he bought his first synthesizer and later a whole bunch of hardware filled his studio. Developing his sound he decided to work as a Dj. In 1986 he perfomed his first public Dj set with success and got invited to play at pirate radio stations around Luxembourg.Around 1988, Luxembourg caught up on acid house. Ionic's time had begun. He organised various acid house events around the country. After years of going through different phases of new beat and Hardfloor, a friend, DJ Chich, introduced him to Belgium Techno. In 1993, he started a new project with Vektor (Victor Miranda). T hey formed a duo, "McCoy & Vektor". Their first track, "Evoluter", was a bomb for that time and filled all Dance floors in Luxembourg. T hey worked together a few years.Years later Ionic signed at the Netherlands Label BPM Dance and released together with D-Factor on the sublabel Tri Lamb.Ionic signed also on Response Audio UK for 2 vinyls which got masssive support by the famous star DJ Keoki of New York. A planed USA Tour was the result of this.Ionic got known for his live remixing skills and live bootlegs during a DJ set and for joking with the crowd on the dance floor . Always keeping them on the move and also for his Live acts where he is only playing his own tracks .These days he is playing a mix of Techno and Oldschool that he will never forget to play as well. Hard to describe but a set which will make people move can be expected.Ionic Benton signed at various labels for remixes and at Bonzai Music where he is also producing on several sub labels for remix projects and his own tracks which got remixed by other artists like Paul Edge, Kemmi Kamachi, Michel Van Tune and so on.2005 he created Impact Audio Records.2010 he created his Label "contrast-R" which works fine and has international artists featured on it like Vegim , Israel Toledo , Nathalie De Borah , Hefty ,Paul Edge , Nuno Z anga , Luke Creed , Monosurround, Kemmi Kamachi, Nixu Zsun, Oliver Koop, Demia E. Clash, 88UW, Palette, Frau Anke ....etc.2011 his Music made it into the Movie Buisness and 5 Tracks got into the Movie "Sleepless Night 2011" ( shared in the USA by Robert de Niro )2013 he applyed for another Movie called " Standby" with again more TracksIonic was also the producer for the released e-lake themes: 2001 "Time for the Open Air Party" / 2002 "I wanna party" (with an official videoclip) / 2003 "I wanna Party (with an official videoclip) 2005 with "10 years".