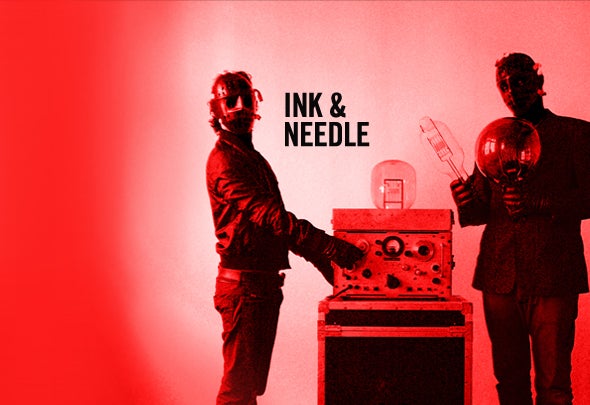 Ink and Needle With the great success of their tattoorec.com series, the two Copenhagen artists, struggle to keep their identity hidden. During their gigs all over Europe, they have been wearing their signature hockey masks. The idea is to let the music speak, and not them. This concept has somewhat backfired, since everybody wants to know who they are. Identity aside, the shows have been received extremely well. The pairing of deep emotional techno with strong roots in Detroit and Chicago, with live electronic percussion, has proven a successful formula. The list of supporters is long, and considering the fact, that the duo has only released 10 tracks, the list speaks for it self (see below). Tattoo the concept Tattoorec is a label with a very simple concept. The tracks released don't have titles - they have tattoos. Tattoos are the ultimate dedication of love. Whether it's a name, a symbol or a number, tattoos are there because they are important to the owner. They don't have to be beautiful or elegant, and they don't have a meaning to anyone but the owner. Some people seek acceptance and follow the mainstream with their body art. Some people push the limit and reinvent what a tattoo can be. Some people stay true, and go old school with their tattoos. That's why tattoos and music are so alike. These tracks are a part of us. We have created them with our hearts. They might fade and turn green over the years, but we will always remember them. Hopefully so will you :-) Supporters so far; ewan person, john digweed, dj sasha, sven väth, ricardo vilalobos, luciano, roger sanchez, ivan smagghe, jerome sydenham, richie hawtin, mark romboy, trentemøller, italoboyz, stephan bodzin, gregor tresher, mark knight, satoshi fumi, pheek, loco dice.