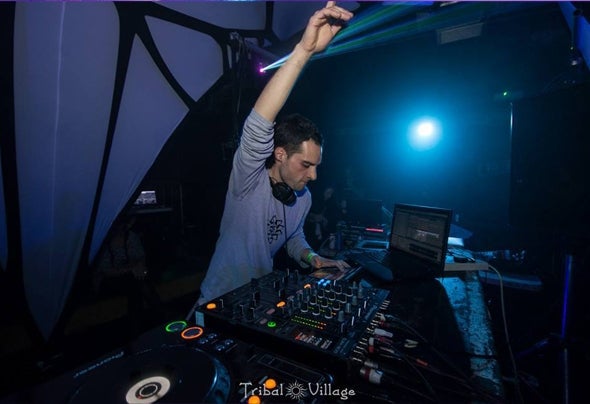 Matteo Imeri aka Imry was born in North Italy in 1982. His interest in music started early on in his life at the age of 9, when he began studying classical music theory which soon evolved into playing saxophone for the city’s orchestra and a teenage rock band. At 15, he discovered Hardcore and Techno music and after only a couple of years it became clear that his passion for music wasn’t going to stop there. Aged 20 he became a member of the Hardcore Legacy Dj Team and performed in different clubs in North Italy and Switzerland. In the summer of 2003 Imry started following free psychedelic trance parties in around Italy and the UK and by 2004 realized that he had a real passion for Psytrance, a passion that pushed him to look deep into the different sub genres of the style to select high quality music.After moving to London in 2006, his love for psy trance continued to increase and in 2010 the Imry project was born.Imry found real inspiration within psygressive and fullon where very strong baselines and trancey riffs brought to life his emotion and love for this sound.To date Imry has performed at various London events including Progressline, Auralphonix and Itzama Crew and internationally at festivals including cK Festival in Tenerife, Spain and Sundance Boutique Festival in Antalya, Turkey.In addition to DJing, Imry is also working in studio on the release of his first EP. Imry’s production style is influenced by artists such as Omsphere, Techyon, Gaudium and Protonica who blend progression with power to bring the listeners to the next level of psychedelic experience.Having joined Free-Spirit Records in late 2012, Imry has recently been appointed as A&R for the label and is ready to embark on the next stage of his musical journey supported by other authentic Free-Spirits.Watch this space! Music –Light- Love