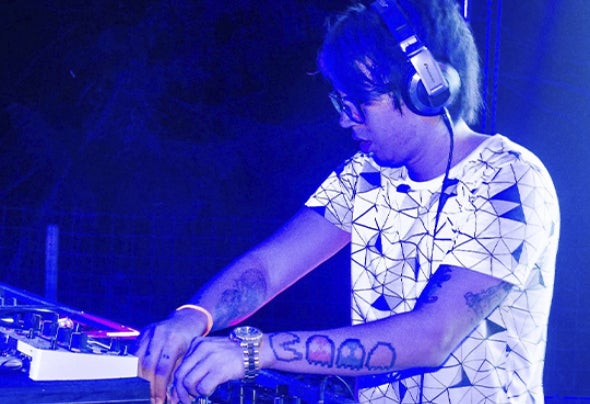 Henry Uicab better known in the world of Music as Hus, is a producer and disc jockey born in Mérida Yucatan Mexico on September 16, 1991 living in Tampico Tamaulipas Mexico. Beginning his musical career at the age of 14 in various rock bands as a drummer and percussionist, Hus's life and career takes an unexpected turn, becoming more involved in electronic music. At the age of 18 he began to practice non-stop and improvise his own sounds during the mix by using different fragments "samples" disc and that he captured by means of specific cuts that at the same time he integrated into 2 channels in order to make his session even more personal. The first Release of him was Time / Hey! released on Mirelle Noveron's record label "Red Delicious Records" getting a great response from the audience. His second single entitled "I want to show you my digital love" also signed in the same record company took the top # 9 in Electro House being a song of the genre "Synthwave 80s" sharing top list with great artists like Mario Ochoa, Criminal Vibes , Alex Kenji, among others. Hus has stood out in his city as one of the most outstanding talents not only for his unique and creative style of presenting his songs and sessions, but also for the great charisma and energy of him that he transmits to the public. Hus exclusively concentrates all learning and experience in a new facet focused on all his influences such as; New Order, Space, The Focus, Daft Punk, Frankie Knuckles, Bee Gees, Barry White, Diana Ross, Sister Sledge, Kool & The Gang, Kc and the sunshine band, Earth Wind and Fire, The Trammps, Silver Convention, Lipps Inc ., Tavares, Rose Royce, Ohio Players, The SoS Band, Commodores, The Gap Band, Salsoul Orchestra, Rufus, Giorgio Moroder, Armand Van Helden, Donna Summer, Kaja Go Go, Joey Negro, Modjo. Offering a fresher sound and a whole new name.