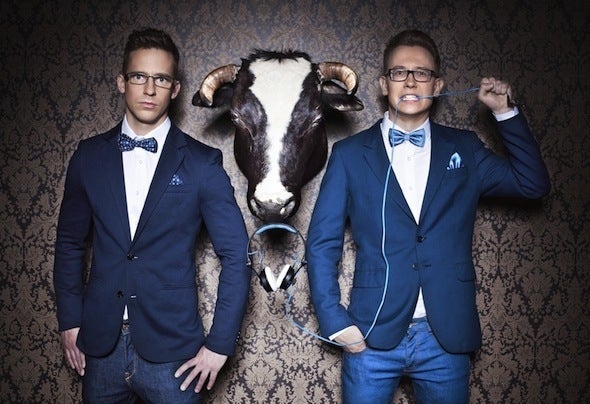 For several years they have been creating a unique and unusual style on the music scene, knowing that their every step would lead them to what they want to show the world today. Selling thousands of vinyls and CDs, making music for the biggest names in the music industry, topping sales charts and receiving numerous awards for the best producers in the category. Now it is time to start a new project, which is result of love to music and a great passion. After almost a year of hard work they want to show everyone their own meaning of music and its beauty. Here comes a new duo - Glassesboys. Although they want to broaden their horizons and reach wider audience, they still intend to remain faithful to the electronic sounds, where the whole adventure has started. The path they have followed so far was the birth place of many experiences and great fun, all of which they will never forget. At one point in the past, EMI Music Poland representatives started following them. In 2011 they decideed to sign a big contract and now they represent Glassesboys art. Everyone who has heard guys’ productions or demos, including singers, producers and record labels, were delighted with the material and believed success was on its way. The Glassesboys style is a combination of melodic, energetic, memorable and melancholic club sounds. Each track is a seperate story, a piece of their musical experience. Glassesboys compositions were noticed by an appreciated Hollywood composer John Murphy, one of the most popular score writers, maestro of soaring melodies, famous for the music production for such blockbusters like "28 Weeks Later", "Miami Vice", "The Last House on The Left", etc. On the Glassesboys’s debut album there are many huge guest appearances: Tara McDonald, Romina Johanson, Barbara Tucker, Craig Smart , Maya Days, Angie Brown, Maria Nyler, Jan Johnston, and many others. All of these artists believed in success from the very beginning. Long hours spent in studio, full of fun and satisfaction resulted in such hits as „Beautiful World”, „Move On”, „Where Is Love” or „Time Indefinite”. Moreover, many vocalists are also co-authors of music hits produced by The Rolling Stones, Kate Bush, Fatboy Slim, David Guetta, Paul Van Dyk, Erick Morillo or Axwell (Swedish House Mafia). Previous projects lead by Jared and Tom have had many achievements in music, including performances at many prestigious music festivals around the world, like Sensation White or Kazantip. What’s more, they visited most of Europe, from Ibiza through Sweden to Ukraine. All of this was an inspiration to create the Glassesboys project and make music of the highest quality. www.glassesboys.com www.facebook.com/GlassesboysOfficial www.youtube.com/GlassesboysOfficial