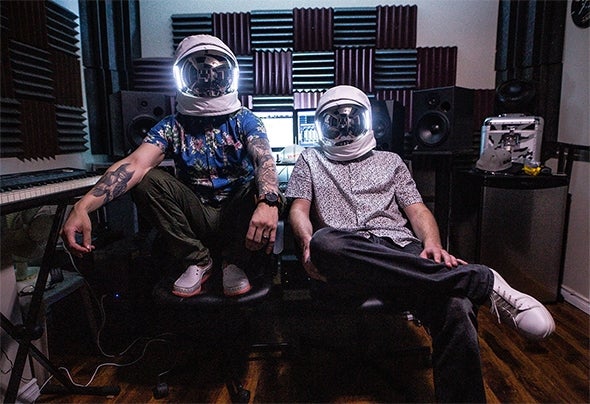 Having become disillusioned with the quintessential sound earth music had become known for across the galaxy, our 2 heroes decided it was time for them to set out amongst the stars. To travel to the furthest reaches of the Milky Way and beyond in search of a new sound.They posted an add on craigslist's rideshare offering to pitch for gas and snacks for the quickest ride out of the solar system. With nothing but the clothes on their back these 2 brave souls set out on the greatest adventure in human history...Years of searching, following every lead and many battles with epic space monsters saving countless civilizations from annihilation, in the end they found what they were looking for at the centre of a dying star. They discovered the perfect combination of sonic frequencies, melody and rhythm. This is what they had set out to do, they accomplished their goal and thought the adventure was over, but, ultimately, this was only the beginning of their story.After killing it on the interstellar music scene for a few millennia and winning 7 space Grammy's the pair got news of the situation on Earth. Hearing of the current circumstances plaguing their home planet which was now tittering on the edge of destruction. A tipping point had been reached.The decision was made to return home. The pair abandoned riches, glory and fame and again with nothing but the clothes on their back they started the long journey home through the coldness of space.Thanks to the advancements in space medicine the 2 friends had barely aged a day and because of time dilation, which is the difference of elapsed time between two events as measured by observers either moving relative to each other or differently situated from a gravitational mass or masses, from the point of view of their fellow earthlings the 2 had only left yesterday.So whether you noticed or not the Galactic Hobos are back from space baby and they are here to save the world!