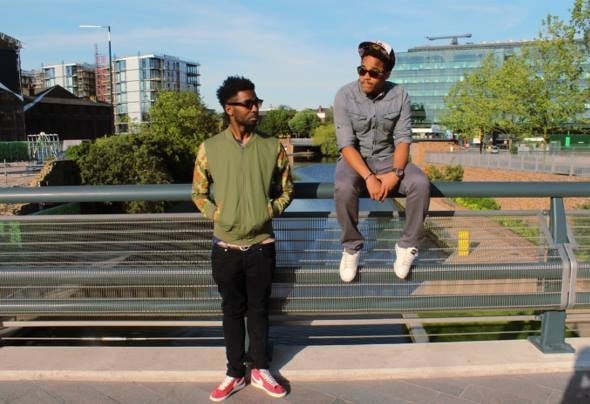 Flymo & RePlay are a London-based house DJ duo that see the art of mixing as a natural reflex.From the the early age of 5 Flymo & Replay have had music within their souls, with both fathers embedding various music styles, beats and emotions into their daily lives. Flymo was in London, RePlay in Portugal -- different countries, same passion; music.Flymo’s father started teaching him how to mix from the age of 10, mixing Motown classics, traditional African chants and drum and bass; from then he knew that music was his passion. Continuing his learning through today, Flymo started producing and promoting parties at the age of 16. RePlay's introduction to music started at a very early age as well, with his dad being a musical artist himself. Waking up to the sounds of a wide variety of music and listening to his dad producing his own helped him develop a passion for producing from an early age. He made his first mixes on a two channel tape recorder. At 16, RePlay moved to London and became neighbours with Flymo. T heir mutual love for music helped them form an immediate and strong bond. Flymo showed RePlay how to use turntables and RePlay taught Flymo how to play various instruments – and so it all began.House parties were their territory -- throwing hard beats in the speaker got them the local recognition they needed to get them their first set together at Penthouse, where Flymo used to be resident. They quickly established themselves as strong leaders in the West End area, from Penthouse to Studio Valbone, One (formerly Sound), and many other West End Venues.Always playing together helped them develop a unique style, mixing their abilities and skills to create their own, very personal genre.In 2011, after pacing through the West End for over 2 years, they met Baps, who moved in their neighbourhood recently. The three of them quickly linked up and understood that coupled with a serious management and image awareness the duo could take off to dominate their first love, the house scene. The trio created a music agency called Musika Korp, With Baps bringing his managerial knowledge to the team on top of the musical talent already present, a spicy cocktail was born, ready to blow up beats, tracks, decks, clubs and people's heads.The trio jumped into 2012 full of ambitions. Winning Love Box Festival’s DJ competition to start the year on a high note, RePlay went back to his hometown during the summer to participate in the CVWMF (Cape Verde World Music Festival). Driven towards their goals, Flymo and RePlay got into the art of production, with several tracks on their record already released by No Agenda Music, South B Records, G- Mafia Records, and ArtLab Records, and upcoming releases on CUFF, Sleazy G and Beachside Records.Great collaborations came in, with dates in Brixton Jamm as headliners, Pacha, Egg, Dukes and others. Playing alongside greats DJ Greats like Omid 16B, Mr.C, DJ Vibe they found sole focus on the deep house scene with great gigs coming up along these mentors, with confirmed dates in Ibiza, Holland and France this summer.