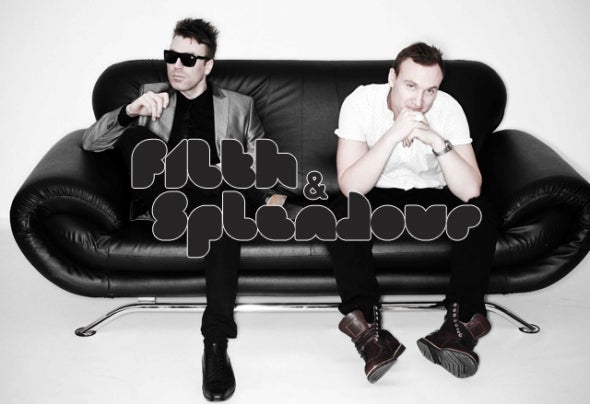 Filth and Splendour are the combined talents of Oli Cassidy and James Trystan, two great DJ producers whose events and releases have gathered a massive following in London’s rocking dance music scene. They enjoy bookings and have held residencies at some of London’s finest nightclubs - The Egg, Ministry of Sound, the Key, Matter and the Cross all helped to hone a sound that combines the energy of house, the depth of techno and freshness of electro that’s been garnering support of big names as varied as Carl Cox, Jaytech, Markus Schulz, Claude Von Stroke, Kissy Sellout and Groove Armada. Their first release "Language" went straight on to Godskitchen’s Underground Album 2007 and was followed by a slew of electro, tech and progressive tracks.Released on labels such as Cr2, Twisted Frequency, Baroque, Data Records and the boys’ own Imprint Itch Records, they’ve landed numerous more compilations and have selected remixes by artists like world top DJs Umek, James Harcourt, The Loose Cannons, Kalva and Timo Garcia. World tour destinations for 2010 included Thailand and Greece with festival appearances at Glastonbury and Creamfields.In 2011 their tracks Knight Rider and Hot Pick released on Cr2 climbed to number 9 on the Beatport charts and was blasted out on Carl Cox’s Global radio show. After being heralded as a Miami smash it is still being re-released now on compilation after compilation. Towards the end of 2010 Filth & Splendour proudly remixed Call & Response by James Harcourt, arguably one of the biggest techno hits from 2009, which gained them the support of Andi Durrant on his Galaxy FM radio show. Another hit remix called Vegas was released on Baroque then snapped up by Armada Music as a hot Ibiza track 2010. With increasingly strong releases on Cr2, Baroque and Dojo out across March and April 2011, alongside a hotly tipped and anticipated album almost completed Filth & Splendour show no sign of stopping and are of course, available now.