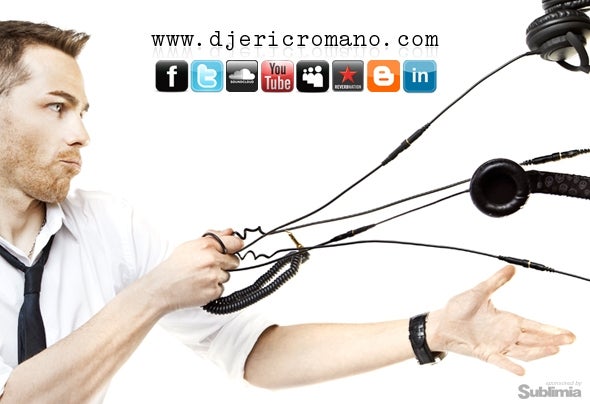 The career of t he reput ed Barcelonian DJ and producer, Eric Romano, is an established and rising musical trajectory with his own particular sound both in his production and his sets of mixtures. In a very short time his apotheosis and ascending career has led him to the best national and international clubs and festivals, such as Sónar, Matter (London), Palace (France), Liquid Plaza(USA), Camelot (Japan), Termix (Czech Republic), Studio 54 (Russia), Nebo (Bulgaria), CBA (Croatia), Pacha, Privilege, Cafe Olé, Catwalk, among many others of Germany (Stuttgart, Berlin), Holland (Amsterdam), Belgium (Antwerp) Mexico (Mexico DF), Colombia (Bogot a),Argent ina (La Plat a), Dominican Republic (Punta Cana), Morocco (Casablanca).With a long experience and a solid background, this prolific producer, in addition to an extensive proper discography and his own successful and countless remixes for famous artists, has worked for the most prestigious companies around the world, such as Universal, Arcade Music, Tempo Music, Blanco y Negro, USA import and a long list of first-class record companies, in countries such as Belgium, Holland, France, Germany, Spain and U.S.A.Throughout his long career as a music producer, Eric Romano, has sold more than 1,000,000 albums all over the world.His own record label "Underside" constantly publishes a mat erial, which quickly becomes t he object of worship thanks to the unconditional support of his fans. Due to his predilection for creating hits, the recent t racks "So get t ing over" or "Check t his out " have earned their deserved recognition of the greatest icons of electronic music in a very short time.Eric Romano's charisma is boundless, the triumph follows him wherever he goes, the words “quality” and “success” are the most appropriate to define him.Each of his performances is an authentic show, a conglomerate of extrasensory feelings and a genuine pleasure for the more refined and selective ear. Overcoming himself, this young producer incorporates visual elements as an inseparable part of his “live” proposal and as a natural extension of his musical discourse.His career is a constant evolution, looking for new goals and creating tendencies. His professional trajectory is full of work and dedication.Eric Romano is undoubtedly a true innovator, a reference of electronic music, an indispensable figure in the elite of the worldwide recognized international Djs. Marking definitely a different concept of session and constructive mixing style, he is properly regarded as "The vanguard Dj" and recognized as one of the most talented producers.Eric has recently been awarded by the "Vicious Music Awards" for the successful remix of "Love Ground", originally produced by David Penn and Dj.Chus.Constantly reinventing himself, this producer investigates, experiments, composes and synthesizes in his own mental recorder new techniques and new sounds, skillfully adding to them his excellent knowledge of sound engineer.Successfully creating something unexpected, cool and unusual, Eric reveals his exceptional qualities as an authentic electronic alchemist.With his extensive experience and "savoir faire", each of his apotheosic sessions is a constant explosion of energy, pure rhythm, an endless mental journey, full of ecstatic emotions that don’t leave indifferent. Eric is an excellent teacher, who makes a true master class in rhythm, trusting firmly in each movement he makes and putting all his passion in music.Eric Romano faces his new challenges with the same enthusiasm of the first day, keeping alive the essential illusion, the one that destines his professional future be full of new projects and expectations.