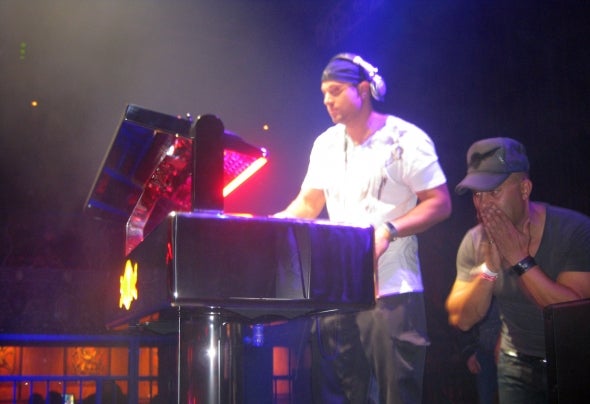 From the new world order to the new way to order, its all in the perspective these days. Sound is the objective and what is hot? Well, you won't hear this sound in the main stream of society, or will you..hmmmmm?Dj, Producer and overall jack of all trades, Elevatah aka RIck Khan is one to watch for in the last days of are known reality. Here to bring conscious music for our auditory senses; this man focuses on enlightening our being through sound and visual pleasure.His beginning in t he elect ronic world were humble and quite underground. From early Rave experiences in Chapel Hill, NC around 1992, to buying his first pair of turntables in Buffalo, NY around 1993, eleVatah's love and contribution to the music was obviously apparent and became only stronger as the years progressed. After several residencies and thousands of shows in Western NY, Toronto, Florida, Las Vegas and California, his skills were honed and he knew it was his true calling!Many of people have called his style funky & groovin', intelligent, moving, and most importantly ; elevating. Truth be told, its all of that, but what's amazing about this producer is his dynamical range of styles and soundscapes incorporated into his original productions and remixes. From Jungle to Tech House, this man has the indifferent proper flair for every genera, and delivers it with that unique eleVatah sound. His live shows are the best, and the new one is heard to be even more amazing. Lots of live original 3DHD video content and an elaborate light show. Keep your ears, eyes and minds dialed to this frequency. 2012 will be an explosive year in music for this young man indeed!