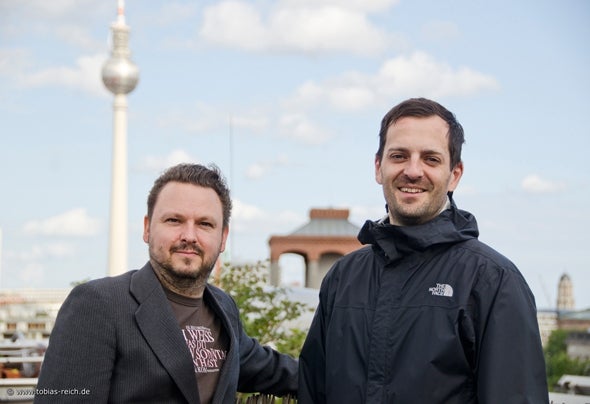 It is 1993 when Dole meets Kom in Berlin’s Delirium record store, where both work as vinyl dealers. Complementary music taste and an evolving friendship are the basis for numerous mutual DJ gigs at all the mayor clubs around, like Tresor, E-Werk or WMF. Producing under the moniker Clubheroes, their first single ‘Dum Dum’ is released on Chicago’s prestigious Relief Records. Also, they join the artist roster of legendary Formaldehyd Records.The own label BCC Music is the next step in their artistic career. Founded in 1996, it is the creative launching pad for a massive output. The duo’s probably most famous project is Studio 45 with tracks being released on Azuli, Nervous Records and David Morales’ Definity Records. Under the name Studio 45, Dole & Kom play DJ and live sets all around the world, the title ‘Freak It’ even hits the Top 40 in the UK.In 2004 Dole & Kom start another label: Death By Disco. Already the first EP ‘Any Fuckin’ Nite’ becomes a bombastic banger on Europe’s club dance floors, the following 12” releases receive great feedback, as well. Their refined productions raise more and more interest within the scene, various EPs are released on labels like Bondage Music, Tsuba, Force Tracks, Schatten, Ostwind, Superfancy and Session Deluxe. Just before the year 2011 comes to an end, ‘New Jack Nation’, featuring the vocals of Chicago’s House music legend Tyree Cooper, hits the clubs.With their both sophisticated and independent style, Dole & Kom perfectly match the musical ideal of Acker Records, which they join in early 2012.