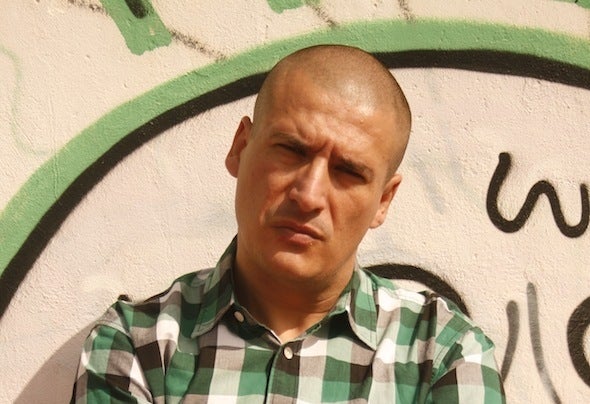 This very well known artist from the west of Andalusia (south of Spain) starts his professional career in 1987. His talent has placed him at the front of the electronic scene, managing techno and breaks styles. His name is seen in all the nightclub flyers and sells records throughout the whole world. The entire story began when he decided to create a radio-show where used to play tracks from important groups such us Front 242, Nitzer EBB, 808 State, Orbital.. among others. In 1990 he left the radio station and took part in a new group project called The End, which used to play techno-pop in all its variants with straight influences of hip-hop, but this didn't take much long. From 1993 on, Rasco was already one of the best known deejays of his county, while used to play in the most famous nightclubs of his city introducing new styles such us Trance, Acid Techno, Goa, Jungle.. Soon, all the clubbers were familiar with his name which was seen in all rave and party flyers of Sevilla, Cadiz, and Málaga, and he quickly became the representative deejay of his county (Huelva). After five years of constant work, he fund his actual booking agency and promoter. Another Dimension.., with the only purpose of organising parties to show new electronic music tendencies. At the beginning of the new millennium, he was booked by one of the biggest promoter companies of Andalusia, Satisfaxion, which carried out a big amount of important festivals such us ElectroMusicParadise, Tribal Nation, Esparrago Rock, SFX Live Dance Festival.. which helped him to grow in popularity. In these venues, he played techno and breaks with important deejays such us Adam Beyer, Rino Cerrone, Richie Hawtin, Kenny Larkin, Anthony Rother, Vicenzo, Adam Freeland, Freq Nasty, Rennie Pilgrem, Atomic Hooligan, Phanton Beats, Hybrid.. among the most important ones. In 2001 he began to work in his own records shop Another Dimension Records, one of the most famous ones of Andalusia at the moment. In 2002, he published six releases using the pseudonym SFX Beats, two of them under Future Funk Squad´s label Re:connect Records (one of his most important hits was SFX Beats 001 ..Serious Sound.., 1500 sold). Soon, the most important BreakBeat radio stations of London (Pyrotecnic, BreaksFM, and IBreaks) showed a great interest in him. Then, Rasco started to perform live shows in these stations and almost immediately he took part of the BreaksFM group whereas his popularity grew throughout the English crew. Then, he was booked for playing in UK Weekender Festival with important artists like Dj Hype, Zinc, Ed Rush & Optical, Friction.. and is waiting at the moment for important dates as the one at Fuse or Brixton. The last Essential Breaks compilation is mixed by Rasco, and his name is found in other important compilation like N-mity Sound Records or Duplate Records. He also has lots of published remixes in Spain as the one under Nitro´s label, Future Breakz (001 ..Lookin at the future rmx..) and new works such us the seven Pirate Records releases. At the moment, Rasco is working with Dj Quest (London) in a project where the most important BreakBeat deeyais of England are taking part in: Cyberdimension Booking Agency, with the exclusivity of Autobot (BotchitBreaks Rcs), Deep Impact (Cyberfunk Rcs), Distortionz (Bass Invaders), ED209 (Wireframe Rcs), Mutiny (Funkatech), Breakfastaz (Cyberfunk Rcs), Ollywood (Hardcore Beats), Odissy (Cyberfunk Rcs), Napt (Plastic Raygun), Drunken All Stars (Unstable Rcs), Bill Vega & New Decade (Full intect Rcs), Mc KenMac (Cyberfunk Rcs), and Dj Era (Unstable Rcs). At the same time, Rasco is the owner of a new Spanish BreakBeat label called Selecta Breaks Rcs, which counts with the collaboration of Future Funk Squad, Peter Paul, Transformer Man.. among others. The label has published only one release in September and was an important hit among bestsellers: SBR001 Dj.Rasco vs Future Funk Squad(United + Peter Paul Rmx). SBR002 Dj.Rasco vs Dj.Quest(kill the riper + Switch. SBR003 Mr.Fli(Rising selection + Deep Impact Rmx. SBR004 Breakfastaz(Hard Knox + Control Z rmx). SBR005 ED209 Vs Dj.Rasco(The Calling of the Darkness + Backdraft rmx). SBR006 Dj.Isy Vs Dj.Rasco(Bad Beats + FFS rmx). SBR007 Kem (I rip it + Peter Paul rmx). He is also about to publish a new release under the Re:connect label, reference 006, called ..Hungry & Carnival.., which will be available soon. He is well known in Portugal by his Techno sessions at Kadoc (Algarve), one of the most important nightclubs of the whole European geography, but BreakBeat is his main objective. He is also the key for significant festivals in his county like Kolombinas, Breakmission, FFS (Sevilla).. among the most important ones.