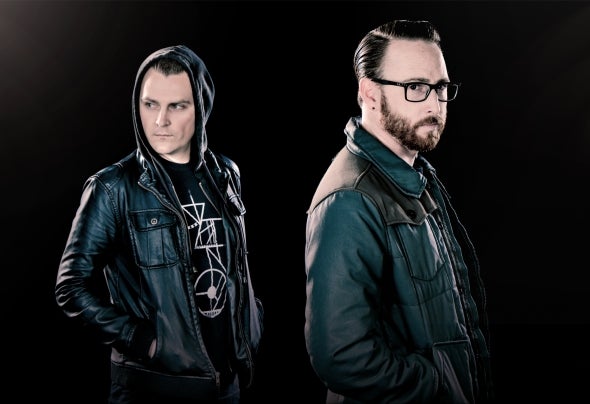 DIVINE ELEMENTSOriginally spawned from a small studio in Los Angeles, California, Divine Elements began with a vision of a collective that would eventually provide audiences with an experience that is often hard to find in the electronica music scene. An experience that would change what party goers alike expect from performers at clubs and electronic music events around the globe. That vision was a live PA which would rival the best of both the audio and visual worlds. A collective of enthusiasts performing on stage with synthesizers, guitar, drums, vocals and integrated video stimulation. Once inspired by such artists as Roni Size and Reprezent, Thievery Corporation, Daft Punk, Crystal Method, BT and Prodigy, Divine Elements set out on a mission to represent Drum and Bass and all other genres they encompass in a whole new light. Group founders Concise and Ru started the collective with the idea that they would introduce new "elements" as time went on; finding the right artists to join them on their mission of "giving the audience what they deserve out of an electronic performance." As time went on, they found just that. Doppler, a well rounded producer out North Carolina, proved to be a proper fit in the group as he shared very common production tastes. His love for all styles of electronica was right in line with what Divine Elements was all about, “Variety.” Before Joining the group, he had an array of releases, some of which were topping the download charts on sites like Beatport.com. Other additions include the likes of Kris Jung; a beat-boxer/Guitarist from Los Angeles and close friend who has guested at many performances in the past. His tongue twisting rhythms and distorted guitar sounds add a unique twist to an already unique live sound. The group has been known to perform live hip hop/drum and bass remixes of classics like Black Sabbath's "Crazy Train" with Kris, leaving the crowd begging for more. Also, fellow producer Brian Beckion, otherwise known as "Psionic" from Los Angeles, adds his own element of heavy metal lead guitar and rhythm. Psionic's screaming melodies have become somewhat of a signature “element” in DE’s music. Drummer Dave Farina was added as an "Element" in mid 2010. His relentless percussion has earned him the rights into being the backing force behind the teeming snares and pounding bass kicks of Divine Elements' live performance. Fellow producer and DJ from the Los Angeles area, Southpaw joined the collective as their live scratch DJ and adds the classic West Coast Hip Hop vibe, which is a benchmark of DE's unique sound. Southpaw is featured on a variety of DE tracks including the remix of their neuro-tech banger "Lobotomy," from their first album "Defining Moment." The most recent addition to the collective was MC Dino (DKnow), Adding the vocal fire and front man that was necessary to make the act come full circle and round off the lineup. MC Dino had previously gained stature as a solo artist through both his Urban Aborigine project and as a top MC in the American Drum and Bass scene. He has also produced tracks for some of America’s most prestigious talent in both the underground and mainstream music scenes. As a collective, Divine Elements has gained recognition throughout the years, allowing them to perform at some of America’s top events. Having graced the lineups of such gatherings as History and Legendz, D.E. has shared the bill with the likes of such acclaimed artists as Prodigy, Pendulum, Nicky Blackmarket, Hive, Gridlok, Invaderz, Future Prophecies, Evol Intent, Dieselboy and many more. in 2006 they launched a stateside tour called “The Element Of Surprise” for their freshman album “Defining Moment,” which featured live performances all over America. In 2009, the group released their second album "The Greater Unknown" which had heads turning with a more mature sound. The album was a featured release on such well known websites as Drum and Bass Arena, Beatport, itunes and many more, To this day they continue to rise in the charts as America’s up and coming electronic music artists. Affiliates: Ammunition Recordings/Simplify Recordings/Betamorph Recordings/Live & Dangerous/Simplify Recordings/Bigeye Musik/Black Reign LTD./Gold Rat Tooth/RobnSteel Clothing/XSite Radio.com