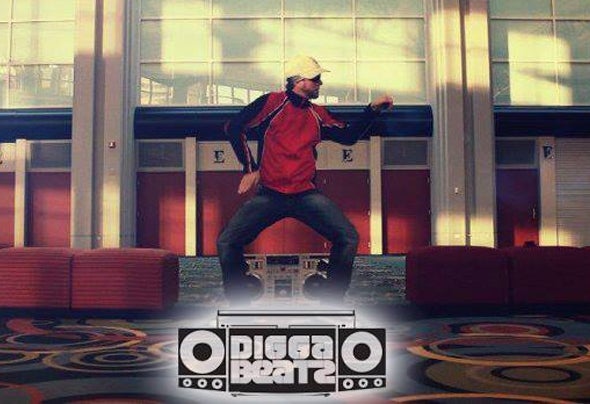 Diggabeatz is more than just a DJ... he's an underground phenomenon .After over two decades behind the decks, sharing the bill all over North America with the world's top DJ's & electronic acts and performing for audiences as large as 80,000 – Diggabeatz knows how to move the crowd into a sweating frenzy like no other. Onstage, his energy is unmatched as he cuts, scratches and mixes his way through a world-class selection of the funkiest of the funk – the original Fader Freek never stops dancing, popping and locking like an electrified robot on acid.Touring the nation since 1999, he’s become one of the hottest breakbeat talents in the U.S. – destroying crowds from coast to coast with his slammin’ B-boy beats, explosive stage presence and amazing skill on the decks. His track selection is intelligent, playing breakbeat sets that range from dark to progressive, but always funky – electrofunk sets that are robotic – and jungle sets that are ragga. A true B-boy at heart, when Digga plays the breakers and poppers come out in full force.After making his first major rave appearance in 1997 at Tribal Gathering with Icey and Kelly Reverb during the five years he lived in Miami, he broke into the national scene in February of 1999 when he and Jason Dunne performed a ballistic 2×4 set at Music is the Key in Cleveland. Word spread fast, and in less than six months he found himself on a busy touring schedule around the country. Ever since, his underground popularity has exploded all over the nation, with Digga logging over 500 performances from coast to coast, billing alongside nearly every major name in the business.Although originally hailing from Macon, Georgia and currently residing in San Diego, Eric has spent most of his life in Utah and considers Salt Lake City his true home.As one of the few Utah DJs to headline nationally, Diggabeatz is literally a living legend at home in Salt Lake. He also choreographed and performed as a breaker with Earth, Wind & Fire in the closing ceremonies of the 2002 Winter Olympics, an experience he says hell never forget, working with the legendary producer/director, Kenny Ortega, who later invited Digga to perform a cameo appearance in none other than the movie High School Musical 3!Although he has had a career that would make most other djs heads spin, Digga says he’s just getting started, after writing and producing only one vinyl release, a live performance DVD from the legendary Valentine’s Day rave Luv2K, and 5 mixed CDs – Live @ Tribal Gathering, Define the Vibe, Fear & Loathing in Cleveland, Put Dneedle on Drekkid, Mechanical Man and Voices of Angels.Now a featured artist on ILIOs Samplebase project, providing scratching sound blocks and also doing work as a touring Stage Manager and Audio Engineer, Diggabeatz continues to tour and release material, consistently proving that he really is, as one Cincinnati promoter states on a flyer, "...simply one of the most devestating breakbeat DJs in the country."Profile Image (590x404)