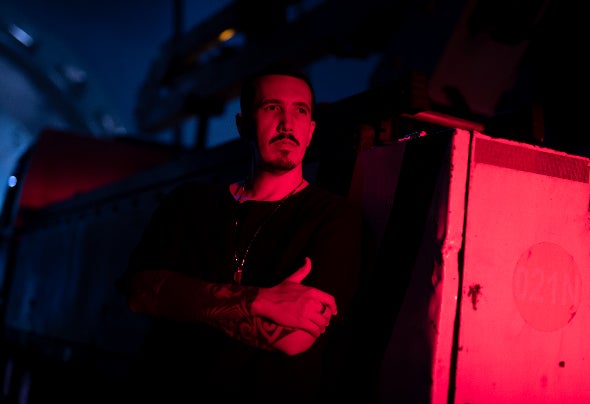 At the age of 16 Marcus discovered rave parties in their early days in Brazil and got completely hooked by the style of music which led him to start developing his skills on mixing Psytrance tunes from artists like Domestic, Cosma, Pixel, Black & White, E-ject, Hujaboy and Wrecked Machines, from that moment on, he became DJ SEVILLIAN. But suddenly his musical life changed completely in 2004 when he first met what the world knows today as ZENONESQUE - Progressive Dark. He found through his best friend Fabio Leal the music of artists such as Tetrameth, Shadow FX, Sun Control Species and Sensient and that was the beginning of his story with ZENON RECORDS. From that moment Marcus started the self made project called DHARANA, joining Zenon Records in 2011 and becoming the first artist from America to join the most legendary label of its genre: Zenon Records. Dharana released his first ep - THE OTHER SIDE in 2012 and his debut album in 2014 - SINGULAR STATE OF FOCUS. Also releasing several tracks on compilations of Zenon Records and Weapon Records. Nowadays Dharana is finishing his second studio album called HUMANS, which will release on Weapon Records in 2020. Dharana toured around the best Psytrance scenes around the globe such as Israel, Australia, Sweden, England and all over Brazil.