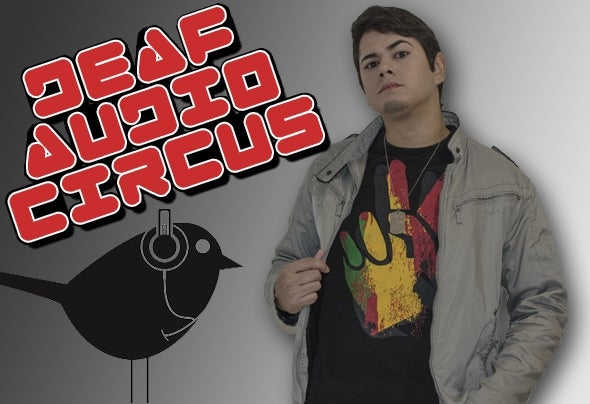 Hailing from Puerto Rico, Deaf Audio Circus is the moniker behind the work of Felix Luis Rosario. The DJ that set out to deliver their own take on electronic music, blending an eclectic range of influences and genres in order to create a dynamic and kaleidoscopic sound, not unlike world class artists such as Umek, Carl Cox, Adam Beyer or Richie Hawtin, just to name a few. Deaf Audio Circus channels many influences, but strives to maintain a very specific integrity and an high degree of charisma and personality, characteristic of their way to approach music and blend styles in a very original way, mixing their Puerto Rican cultural vibes together with an international and open minded approach. Deaf Audio Circus strikes the dancefloors with their blend of tech, house and tropical sounds, where the warmth of the Latin grooves meets the tightness of synth-based melodies and drum machine, truly bridging the gap between these seemingly different musical scenarios. In music, there is no rule that cannot be broken, and artists such as Deaf Audio Circus are well aware of that, refusing to get stuck in a box and determined to showcase their talent. The DJ went a long way since their debut release; single “The Day you been gone” (released on November 26, 2011). This first track was promptly followed by the minimal-techno vibes of “Letter of your Pain”, r eleased by HY-LAND RECORDS, a label with a deep, soulful approach to their blend of electro. Besides being busy producing their tracks, the live element is a very important side of this project. Deaf Audio Circus is determined to bring their tracks, mixes and production to life, and there is no better place to start than the clubs that animate Puerto Rico’s nightlife, one of the most hectic and colorful on the worldwide nightlife scene, particularly when it comes to the San Juan area, where the pair is based. Rosario became a really prolific act, releasing as many as 8 V.A. albums and more than 25 releases. He also managed to get featured in the Beatport Minimal Charts within the TOP 100 artists, as well as getting recognition and acknowledgement on many popular Internet platforms for electronic music and several radio stations on a truly global scale. Deaf Audio Circus does not seem to show any sign of wanting to slow down: This artist is now represented and supported by a growin g network of independent labels throughout various areas of the world, including BedRoomRecords09 (Romania, Europe), Cancun Records (Cancun, Mexico), Music2Listening (California, USA), On Work (Barcelona, Spain), Hy-Land Records (San Juan, Puerto Rico), and Selektor Music (San Juan, Puerto Rico). Let the music do the rest of the talking and head over to Deaf Audio Circus’ official page on beatport, one of the most celebrated and popular electronic music communities on the entire web, where you can stream lots of exciting tracks spanning the DJ’s rich discography and production portfolio.