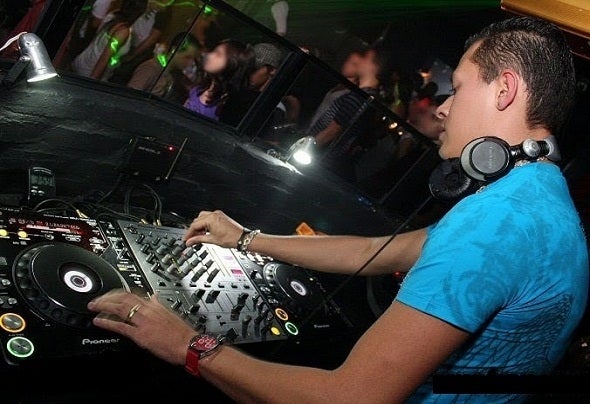 Born in Curitiba-PR, by the name of Cleverson A.Pacheco Cruz, DJ David Allan began early his escalade in the music world. Since 1990 he would pay company to his uncle, responsible for sound systems in many events in the north area of their origin state. In this rumble way, David started identifying his affection for music, by the time only played in k7 and decks. This way great experiences were acquired, contacts made, leading to a broader horizon of possibilities. In 1991, he was invited to play for the first time in the, nowadays extinct, Sistema X Club, which brought the accomplishment of a lifetime dream. Those were times that CDs belong to a distant future, thus more than 50 vinyl LPs were part of his case, all bought in Doctor Discos, Curitiba, and his music was finally showed with MK2 arrival. From to time till today he didn't stop working with music, playing in several night clubs in Curitiba, such as Sistema X, Studio 1250, Aeroanta, Legends, El Mago, Alles Bier, Jockey Club, Planeta Beer, Cats Club, New Epoca, among ot hers and rave part ies in Paraná and Santa Catarina, as Eco Storm – Moving Stone, Project Sound System, Oryon, Eletrogralha. In 1996, DJ Tcheco aka David Allan, started producing his own remixes, putting them available to many other deejays from other countries. Went to Campinas, Sao Paulo, and by this time also played in Santa Catarina every quarter of month or montly in the most contemptuous clubs, such as Club Hanna, Hypnus Club,Ell Sinno,Yukatan,Estacão 170, Oxx Club,Bali Hai, Diva..s Lounge Bar , Beer House,Santo Canto,Club Transamérica,Channel 311,Kallas ,Malaguetta,Zodhia Disco Club and others. Nowadays hi's the resident DJ of 2 Clubs, the Desiree Club and Women's Club. Having such experience and knowledge, and playing in a diversity of clubs in the southern part of his country, his name grew to be known. His style meets House, Progressive, Electro and Trance, in which he has made many songs of his own and remixes. His productions are signed as David Allan. For the constant improvement, David Allan maintains a studio with a close friend, Roger Vital. David Allan has present his music in good company, with famous national and international DJs from the electronic music scene, as Anderson Noise, Alex s, Angel, Diego Logic, Leozinho&Paciornik, Fabricio Pecanha, Murphy, Rica Amaral, Ilya Simione, Ilan, Gu, Raul Aguilera, Rafael Araujo, Sandrinho (B-Vision), Santiago, Kally, Michel Palazzo, K-Milla, Murphy, Renato Cohen, Franca and others