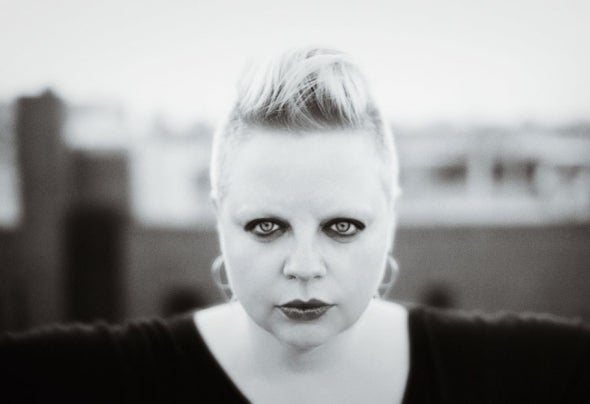 Christy Love has always had a love for music and has beenimmersed in the house music scene for more than 2decades. She is one of the most sought-after DJs in NYC,largely because she consistently destroys dancefloors allover the city (and beyond) with her distinct sets comprisingof a clever mixture of classic and modern house burstingwith driving beats and funky bass lines; she plays a pivotalrole in defining the current underground sound of NewYork”. T his DJ prowess, combined with her production workas House of Stank with long-time collaborator, W. Jeremy,and the success of their label, Get Up Recordings, hastransformed Christy Love into a house music triple threat.Originally from West Virginia, Christy moved to Philadelphiain the early 90’s, where she became a familiar face on thecity’s house music scene. After hearing Cajmere’s “T hePercolator” at Revival one Saturday night, her life wouldnever be the same. She began collecting as much houserecords as she could get her hands on. When Christymoved to San Francisco in 1995, a local DJ believed shehad such a natural ear for house music he gave her twoturntables and a mixer so she could become a DJ. Over thenext few years she began playing at house parties allaround San Francisco and co-hosted a weekly ChicagoHouse party at T he Top, one of San Fran’s favoriteunderground spots. In 2000, Christy moved to NYC, whereshe again immersed herself into the city’s underground clubscene, but this time… as a DJ. Armed with a keen musicalear, a hard-working attitude and a larger-than-lifepersonality, Christy quickly became an integral part of thecity’s underground club scene. In 2005, she began amonthly residency at Debassed, a Chicago Booty Houseparty hosted by resident Mark Salinger (from the infamousBooty Bar parties) at the Williamsburg hot spot, Red & Black.T hat same year, Christy met fellow NYC DJ, W. Jeremy, withwhom she developed a special kinship based on a sharedlove of all genres of music, but more specifically, house. In2006, they started a weekly party at the infamousunderground dance den, mr. Black. STANK, as the party wasaptly named, played host to many of house music’s mostinfluential DJs, including the legendary Wild Pitch Acidmaestro, DJ Pierre. Together with Pierre, Christy and Jeremylaunched a monthly party at STANK, dubbed “AFRO ACID:T he Chicago Sessions,” where Chicago jacked New Yorkwith such world-renowned guests as Cajmere, Glenn Underground, Ron Carroll, Mark Grant and Harrison Crump.In 2007, Christy and Jeremy began producing original musicunder the name, House of Stank. Over the next 2 years,their debut and sophomore tracks, “Baby Brain” and “4 T haFreaks,” were released on DJ Pierre’s label, Afro Acid Digital.In 2008 and 2009, they released, “Make U Jack” and “GetUp, Yeah!” on Dust Traxx Chicago. Together, they haveremixed artists such as T he 2 Bears, 214, Johnny Dynelland T hee-O & Merlyn Martin.In the fall of 2010, Christy and Jeremy started the label, GetUp Recordings, to give themselves and other artists theopportunity to explore musical freedoms and push throughthe ceiling of mediocre dance music. T he label’s roster hasincluded artists such as Heller & Farley, Inland Knights,Honey Dijon, Tedd Patterson, Up Yours, Brodanse, T heCarry Nation, T he Cucarachas, Quentin Harris, Kim AnnFoxman, David Harness, Johnny Fiasco, Automagic, Houseof Stank and countless other established and up-andcomingartists. Christy in now venturing into solo territory with her firstrelease, “I’m Goin’ Under”, a classic underground housemonster featuring a guest vocal by the world-renownedMistress of Ceremonies and Scissor Sisters front-woman,Ana Matronic, to be released on Get Up Recordings laterthis summer. Stay tuned… we’ve only just begun to see thetip of the iceberg from Ms. Love.