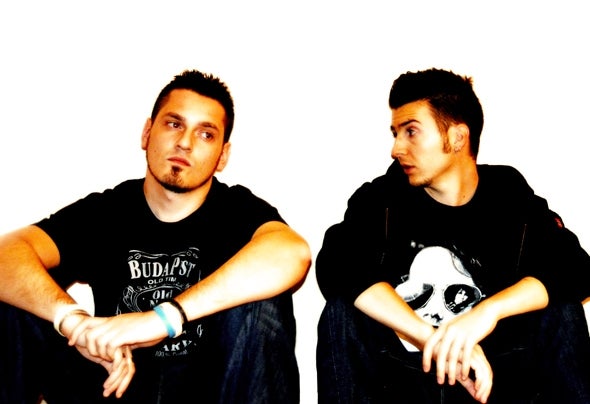 Dj's / Producers / Remixers / Audio Engineers on the international field since 2000, they start their professional career following what were the styles of the time (Trance / Alternative / Techno) gaining immediately an excellent success in Europe, reaching the first places in many charts.There has been a considerable number of collaborations with important DJ's and many pseudonyms under which they work to different productions such as Casey & Moore, Roy Jordan, Static Vanity,Smashing Groovers, Electro Klubbers, Lazy&Proud, Ocean Divine, Mandy, White Symphony, Elisa Blake and many other.As time went by there has been a refreshment in their style which started tending towards Electro House / Progressive House / Trance. Though this doesn't mean they lost their musical coherence.In fact this aspect is what characterizes them. Their works mantain their wonderful harmonies and melodies which are able to amaze leaders of the discographical sector.Every year they are able to come out with extraordinary pieces of work showing all their abilities and signing many contracts with labels such as: Maison Milano Records,Blisscorporation,Smilax Publishing,Takeshi Recordings,Just Digital,Urbanlife Records,Shiva Music,Bit Records,Ipnotika,GreenPark Italy and many others.Their productions are available in many compilations in both digital and physical CDs. One of their major pieces of work was Static Vanity - I'll Get Through which came out on Bit Records and under license in Austria on Zyx Music.Casey and Moore have been supported by the best international artists as: Djs From Mars, Alexandra Stan, Rene from Brooklyn Bounce, Maurizio Gubellini, Antillas, John,O'Brian, Ensaime,Fred Lilla, Outwork, Stefano Pain, Marcel, Sergio Matina,Gabry Sagineto,Vitodito,Provenzano Dj, Alex Martello, Fabio Amoroso, G80's,Serdar Ayyildiz, The Coolbreezers, Karmin Shiff, Gianni Coletti, Alex Berti, Max Riolo aka Chico Ricoand many many others. Casey & Moore are always present as they are often special guests in programsand in radios (for example M2O - Radio Ibiza - Radio Italia Network and many others) and their track are often played. As time went by Casey & Moore have played many roles like: Artistic Directors, MusicalConsultants,Arrangers, Web TV authors, Songwriters, Audio Engineers, Music Talent Scout and A/R Managers. Most of their time is spend in their “Casey & Moore studio”, working on new songs, remixed tracks andmany assigned works.