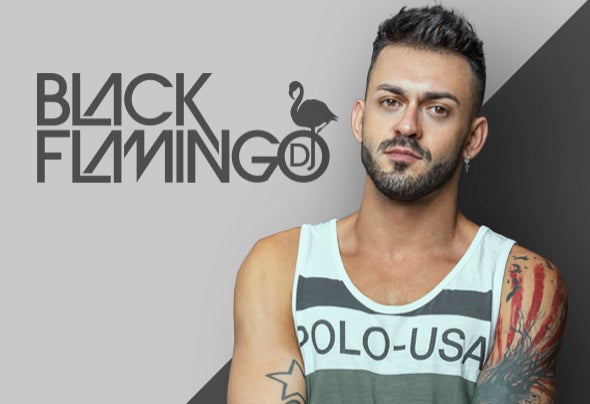 Black Flamingo, born in Madrid (Spain). DJ / Producer with more than 15 years of experience. It is one of the most popular names in the LGTBI CLUBS of the world. His career began to take off, playing major events such as Supermartxe, EuroPride Madrid, WorldPride Madrid and also DJing the famous Eurovision singer Soraya Arenas on the Dreamer tour and Sensation tour.Always unique and energetic, his sets are packed with fresh sounds -house, tribal and progressive rhythms that go hand in hand with elegant melodies and vocals, whist careful choosing tracks that make up incredible sets. This passion has taken him all over the world -Los Angeles, Miami, Costa Rica on his first American Tour, along with Moscow,Dublín,Porto,Barcelona, Paris, Rotterdam, Lisbon, Rome, Bucharest, Romania,Verona.... in Europe. In 2015, he decided to make the leap into musical production therefore making his sessions more exclusive when playing his own remixes and mashups. Soon followed his own productions, collaborating with House vocalist Vanessa Leklein on the impressive “Beautiful” “Hollywood” and “Candyland” which were also remixed by major producers from around the world.In addition, I made official remixes for international stars like Dan Slater, Leomeo or Sr. Edu and Big Kid Dj with a great succes. Most recently releasing a cover version of the classic “I Will Survive” which reached number 8 on dance charts and was played in Pride events all around the world. A regular at Madrid Pride over the last 10 years and is now also Resident DJ in clubs both in Dublin , Porto and Zurich.