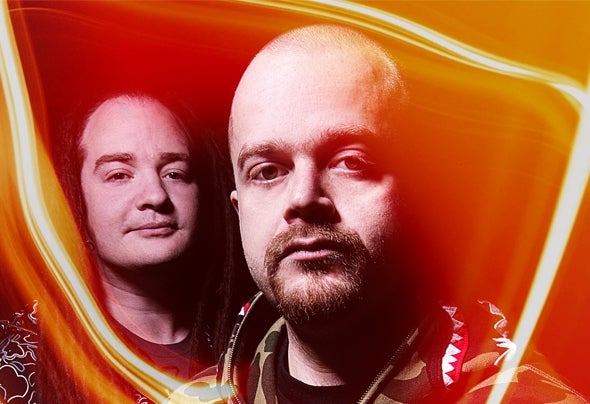 From week in week out gigs, to opening the main stage at the Glade festival, as well as their Breakspoll award winning NSB radio show and running their own record label, Ape Music, Ben & Lex could well be the busiest boys in bass!Nearly a decade in dance music has seen the duo hone their Djing & production skills to new heights in 2012, with a forthcoming debut album and a new live show to go with it. Even with their roots in breaks, the pair have never content to stay within the confines of one musical genre & they embrace every corner of bass heavy music from hiphop to house and from dubstep to D’n’B, which has led to them become massively in demand as club Djs, playing almost every weekend. Anyone who has seen them leaping around behind the decks will know, their frenetic one-on one-off sets will never let you even get close to being bored on the dancefloor!Their distinctive mash up sound of bass music, breaks, house & dubstep can be heard on their fortnightly NSB radio show, which has been nominated for Best Radio Show twice at Breakspoll, and won the Best Podcast Award at the Breakspoll 2010 awards.Their label, Ape Music, has gone from strength to strength in the last 12 months with releases regularily in the top tens of all the download shops with huge releases and remixes from Freerange Djs, 601, Afghan Headspin, Vandal, Terry Hooligan, Flore, Benjamin Vial, 2 Bit Thugs and of course Ben and Lex themselves.With a whole host of festival appearances and releases (including no less than 11 remixes & 4 originals!!!) under their belts in the last year and plenty more on the cards as well these two look like they will be impossible to escape, so if they are in a neighbourhood near you, go see them, jump around and treat yourself to a damn good party!