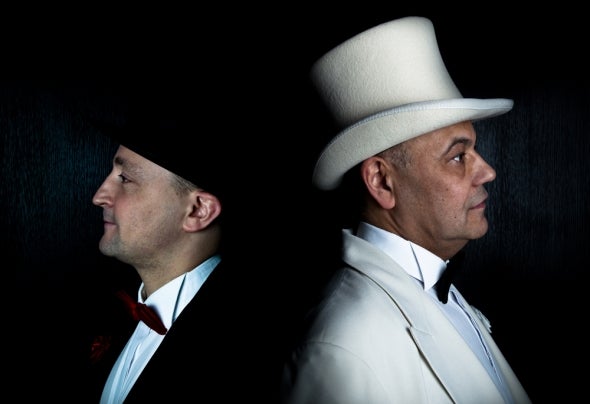 Bart and Baker (www.bartandbaker.com) are two parisian DJ/Producers, dressed in tuxedos and hi hats with house ( for Bart) & jazz ( for Baker) backgrounds. There are many dj’s playing electronic music but what makes Bart&Baker so unique is that they were the first back in 2005 to be able to mix old vintage samples with new, remix and revive old 1920’s music, scratching 1940’s and 50’s tracks and generally making new club music from a vintage source.As Bart&Baker says, “we pride ourselves on reinvention, using elements that already exist like vintage music, performance styles and costume so we were able to please or uncover the swing music shades of rhythms to both vintage fans and modern kids”.Bart&Baker have played Festivals (Calvi On The Rocks, Bestival, LoveBox &Tomorrowland) and various clubs throughout Europe. They also have their own monthly residency at the world-famed Parisian club La Machine du MOULIN ROUGE.They have so far released 6 full lengths CD through Wagram Music, including the 3rd, 4th and 5th volume of the Iconic serie Electro Swing.Through their home label Entouka Productions, they have also released on digital 8 Eps through 2012. Many of their title have charted in the Beatport Top30 as well as in Juno (Top 20 recommendation of 2012). Their first “song collection” will be released in march 2013.They have also provided official remixes to the likes of Dimitri From Paris, “lounge kings” Gabin and “electro swing stars” Caravan Palace.In march 2013 was released their first collection of tunes “Introducing, Bart&Baker” on vinyl & digital.In may 2013, Yellow Productions, the label of BOB SINCLAR will release their first Club effort in the AFRICANISM serie, “Satchmo’s tears”.