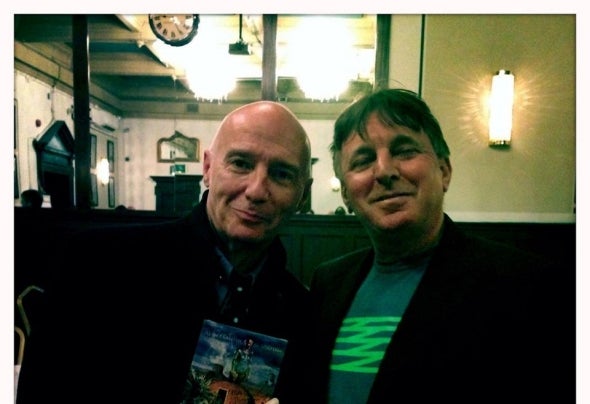 Paul and Robin Simon began their careers in music forming bands in their home town of Halifax in northern England. One of these early line-ups included fellow local musician Billy Currie on viola (later to join Robin in Ultravox). They then joined American soul legend Limmie Snell of Limmie & The Family Cookin in his new band, Limmie Funk Limited to tour the UK. Moving to London in 1976, the brothers found themselves at the heart of the Punk scene, centered on The Roxy Club, The Vortex and The Speakeasy. A chance meeting with Billy Currie at a gig by the 101ers (then featuring Joe Strummer) led to Paul being introduced to New York punk scene musician Ian North, recently brought to England by Eno. The group Paul and Ian formed, Radio, was completed by Martin Gordon (Sparks) on bass. When Martin left to form Radio Stars (in which Paul also played drums for a while), the group changed its name to Neo with a line-up of Ian North (bass & vocals), Robin on guitar and Paul on drums. After Neo, Paul joined Cowboys International, Girls At Our Best and The Fallout Club (featuring Thomas Dolby and Matthew Seligman), whilst Robin joined Ultravox and Magazine. As the 80s progressed, Paul worked in production with Fiachra Trench (frequent Paul McCartney and George Martin collaborator), occasionally joined by Robin, who continued to tour and record with John Foxx, sometimes with Paul. By the early 90s, Paul had joined old friend Glen Matlock (Sex Pistols) in The Mavericks, which became The Philistines, while Robin was reunited with Billy Currie in Humania. Paul and Robin also recorded with John Foxx and Sue Rachel as Blitz.