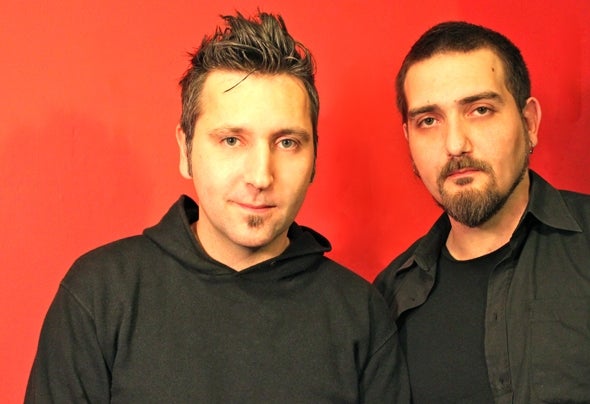 After & Shave (Mario Conte and Fabio Spezzaferri) , both from Naples, met in London in 2002. They shared a common knowledge and passion for music. Mario, specialising in live music, had 10 years experience as a drummer. He played with various groups, focusing on different styles, some of which were not his taste but he still enjoyed and learnt from the variety. He also spent his time travelling in order to take part in stage construction and assist sound and light engineers with the setup of music concerts, movie sets and theatre events. Thanks to Fabioís influence Mario started DJing in 2002 spinning a range of styles. Fabio, specialising in electronic music, had more than 10 years experience as a DJ. He followed his passion for music to London where he studied sound engineering and music production at. Inspired by Richi Hawttin and the like he plays with 3 decks and effects. While he prefers house and techno minimal he also enjoys a challenge and has created his own unique approach to electronic music mixing various styles. Both have been spinning records in bars, clubs and some of the biggest parties in Naples and London and have also organised events. Between 2002 and 2006 they started becoming more interested in music production using programs such as Reason and Logic Pro. Realising that a combination of their diverse musical backgrounds would create a unique and exciting sound led to the creation of After And Shave in 2006. The group released its first album in 2008, Elettroniche EP, with a minimal tech house genre. The duo are always looking for a new sound and have an open mind to any influence and style.